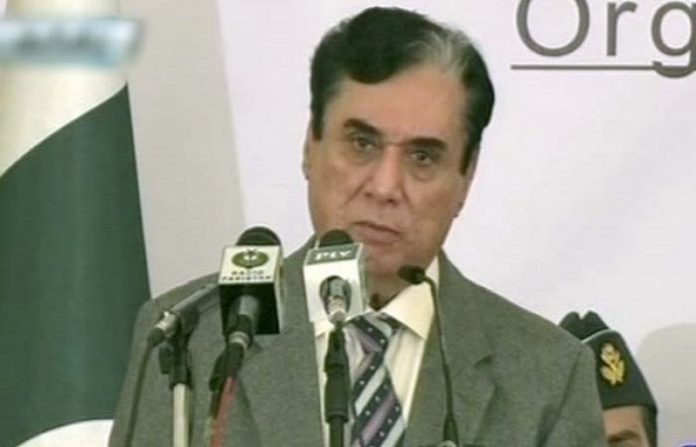 ISLAMABAD: Chairman, National Accountability Bureau (NAB), Justice (Retd) Javed Iqbalon Monday said the Bureau was absolutely committed to eradicating corruption with iron hands and make the country corruption-free.
He said eradication of corruption is vital to for strong economy and prosperity of the country. Chairing a meeting to review performance of NAB at its Headquarters, the Chairman said year 2017 which can be called basically a year of re-invigoration of NAB, “We have moved with new zeal and effort.” He said through detailed introspection and analysis of organizational weaknesses, overhaul of procedures and processes, all pillars of the organization i.e. Operations, Prosecution, Human Resource Development and Awareness and Prevention, have been reactivated and reinvigorated.
The Chairman said the concept of a Combined Investigation Team (CIT) has been introduced in NAB where two investigation officers and a legal consultant are working as a team for a fair, transparent and unbiased, inquiry/investigations as per law. Javed Iqbal said NAB has decided to fix time limit for each step of enforcement i.e. two months for Complaint Verification, four months for Inquiry and four months for Investigation.
A total of 10 months have been laid down from complaint verification to inquiry-inquiry to investigation-investigation to filing of reference in respective Accountability Court to its logical conclusion. He said Transparency International has rated Pakistan in Corruption Perception Index (CPI) from 175 to 116. This isbecause of effective Anti Corruption Strategy which has started yielding positive dividends.
Similarly, PILDAT has indicated that 42 per cent people have confidence upon NAB as compared to Federal Investigation Agency (FIA) and Police. The World Economic Forum and Mishal Pakistan according to Global Competitiveness Index of World Economic Forum rated Pakistan from 126 to 122 this year. He said NAB officers are deeming eradication of corruption as their national duty. “Efforts to combat corruption have been initiated with realization that eradication of corruption from Pakistan is not only NAB’s responsibility but it is a collective social responsibility; that it would result in common good and that we all are together in eradication of corruption from Pakistan,” he added. He directed all officers of NAB to demonstrate absolute fairness and transparency as per law in discharge of their national duties.– APP