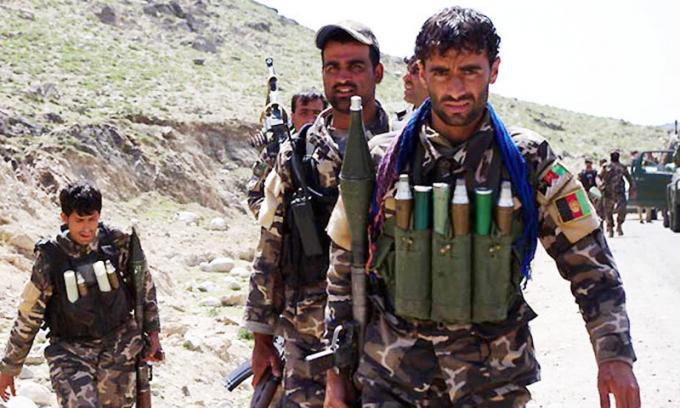 PUL ALAM: At least 14 Afghan soldiers were killed in a US air strike early Monday on an army checkpoint in a Taliban-infested province south of Kabul, officials said.
“At 6:00 am today, two US helicopters attacked a checkpoint in Baraki Barak district of Logar province,” district governor Mohammad Rahim Amin told a foreign news agency.
“The checkpoint caught fire… and 14 Afghan army soldiers were killed,” he added.
An American military official said he was “aware of an incident involving US forces in Logar province this morning”.
“This incident is under investigation,” he added.
Din Mohammad Darwesh, the Logar provincial governor’s spokesman, confirmed the strike and gave a similar death toll.
Amin said the targeted checkpoint was “not a suspicious area”.
“The Afghan flag was waving at the checkpoint in Baraki Barak when the Americans launched their attack,” he said.
Civilian deaths in air strikes have been one of the most emotive and high-profile issues of the 13-year Afghan war.
A Nato air strike in December killed five civilians and wounded six others in the same district of Baraki Barak.
Nato ended its combat mission in Afghanistan in December, leaving local forces to battle the Taliban alone, but a residual force remains for training and counter-terrorism operations.– Agencies