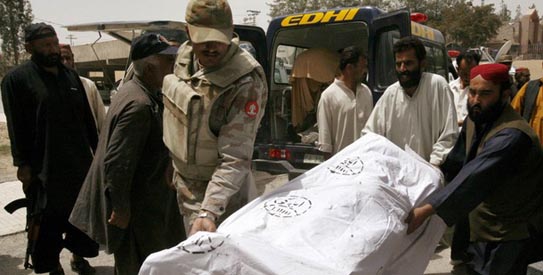 QUETTA: At least 14 people were killed in firing at a bus on Makran Coastal Highway in Balochistan on Thursday.
According to reports, some unknown persons opened firing at a passengers bus in Ormara area of Balochistan. At least 14 passengers were killed in the attack. The passengers were killed after offloading them from the bus.
According levies officials, the dead were being shifted to nearby hospital.
According to Levies officials, around 15-20 unidentified armed assailants in camouflage uniform reportedly stopped five or six buses travelling between Karachi and Gwadar.
According to reports, in the Buzi Top area, between 12:30am and 1am, the gunmen stopped a bus, checked the identity cards of passengers and offloaded about 16 of them.
At least 14 were shot dead, while two passengers managed to escape the massacre and made it to the nearest Levies checkpost. They were shifted to Ormara Hospital for treatment.
Levies and other law enforcement personnel reached the spot and launched an investigation into the incident. The bodies of the victims were recovered from Noor Baksh Hotel.
The motive behind the killings and the identity of the victims are yet to be ascertained.