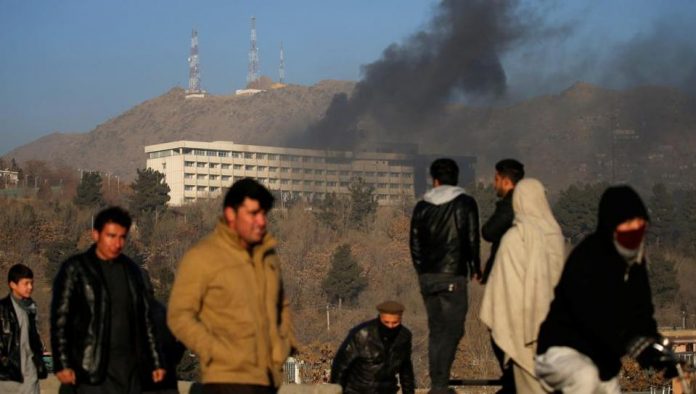 KABUL: Gunmen stormed a luxury hotel in Kabul and killed at least 18 people, most of them foreigners, sparking a 12-hour battle with Afghan forces backed by Norwegian troops that left terrified guests scrambling to escape.
Several Ukrainians were among those killed in the Taliban-claimed assault on the six-storey Intercontinental Hotel in the Afghan capital, Ukrainian foreign ministry official Vasyl Kyrylych confirmed to foreign news agency, adding that more information would be released Monday.
Afghan interior ministry spokesman Najib Danish said 14 foreigners were among the dead, but did not specify their nationalities, in comments to Afghanistan´s Tolo News hours after the overnight attack that ended Sunday.
Terrified hotel guests climbed down bedsheets tied to balconies to escape the gunmen rampaging through the hilltop hotel overlooking the Afghan capital.
One lost his grip and fell in Tolo News television footage, which also showed black smoke and flames billowing from the hotel.
Special forces were lowered by helicopters during the night onto the roof of the landmark 1960s building. Afghan security forces killed all six attackers, the interior ministry said.
They were aided by Norwegian troops, Norwegian military officials told public broadcaster NRK. Norway has helped train Afghan elite forces since 2007.
“I want to say this explicitly and frankly and precisely… in total 14 foreigners and four Afghans were martyred in the attack on the hotel,” Danish said on Tolo, adding that more than 160 people had been rescued during the attack.
Afghan officials have been known to understate death tolls in high-profile attacks.
Danish also said preliminary information showed the attackers may have already been inside the hotel before launching the assault, but gave no further details and warned an investigation had to be carried out.
But he did say that among the dead were 11 people from Afghan airline Kam Air. The airline´s CEO, Captain Samad Usman Samadi, earlier said 42 of its personnel had been at the hotel during the attack — at least 16 of whom were still missing.
The Taliban claimed responsibility for the assault via email. The attack followed security warnings in recent days to avoid hotels and other locations frequented by foreigners in war-torn Kabul. …Agencies