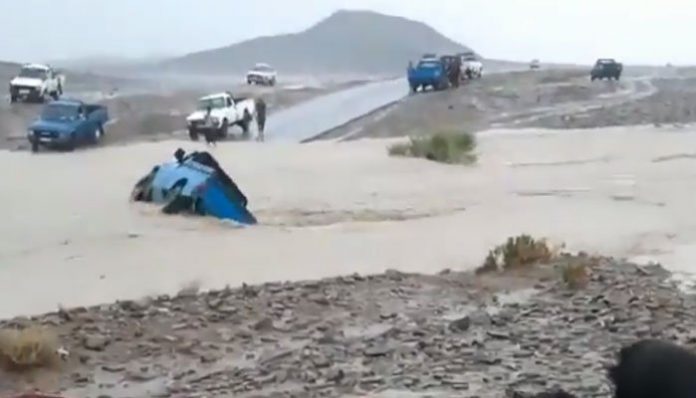 QUETTA (Khyber News) – Heavy rains in different parts of Balochistan have caused floods in the rivers. Nine people, including two children, were killed in Jaffarabad, Dera Bugti and Khuzdar due to rain and floods related incidents.

The government of Balochistan has directed the concerned authorities to remain alert in view of the flood situation created by the rains.Two people were killed in an accident caused by rain in Jaffarabad district of Balochistan, While 2 persons were caught in the flash flood in Hub, 7 tourists were rescued from flood water in Mulla Chatuk, a recreational place of Khuzdar.

A bridge near Baduk on the Makran Coastal Highway was swept away in the floods. Gwadar lost ground connection with Lasbela and Karachi and several vehicles got stuck due to the flooding. In Dera Bugti, 4 to 5 feet of water entered people s houses in different areas.

The administration evacuated the people to safer places. A man was bitten by a snake during flood in Dera Bugti and was shifted to District Hospital. Due to the situation created by the rains, the administration banned the movement of fishermen in the deep sea while citizens from rain nullahs and tourist spots.

The Meteorological Department has issued an alert that the current rains will continue till Sunday in Kalat, Khuzdar, Lasbela, Awaran, Panjgur, It is also likely to rain in Ketch and Gwadar.