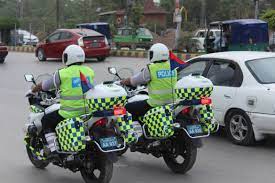 Following the approval of the provincial cabinet, the police jacked up the traffic fines. According to the new fines, over-speeding and signal violation will attract a fine of Rs1,000 while a four-wheeler and a two wheeler without licence will be punishable with a fine of Rs1,000 and Rs500, respectively.

The penalty for driving on the wrong side will be Rs600 for motorbike and Rs2,000 for a small car. Underage driving will attract Rs5,000 fine while not fastening seat belt will invite a fine of Rs1,000.