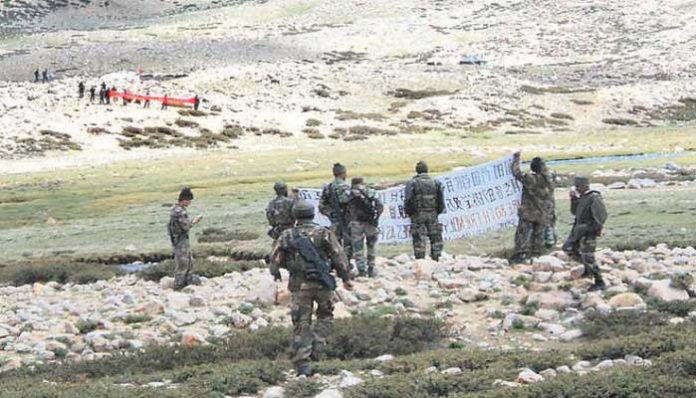 NEW DELHI: At least twenty Indian soldiers including a Colonel were killed in a “violent face-off” with Chinese troops at Galwan Valley in Ladakh on Tuesday, in the deadliest clash between the nuclear-armed neighbours for more than four decades.
The incident follows weeks of rising tension and the deployment of thousands of extra troops from both India and China.
The Indian Army in a statement said during the de-escalation process in the Galwan Valley, a violent face-off took place yesterday night with casualties on both sides.
Meanwhile, China, confirming the incident, said that Indian soldiers crossed the disputed border between the two countries.
Both sides blamed each other for Monday s clash in the precipitous, rocky terrain of the strategically important Galwan Valley, between China s Tibet and India s Ladakh region, which analysts described as “worrying”.
An Indian army source in the region told foreign news agency the incident involved no shooting but “violent hand-to-hand scuffles).
Brawls erupt regularly between the Asian giants across their disputed 3,500-kilometre (2,200-mile) frontier, but no-one has been killed since 1975.
India had earlier put the toll at three dead. But in a statement later Tuesday the army added that 17 more “who were critically injured in the line of duty at the stand-off location and exposed to sub-zero temperatures in the high altitude terrain have succumbed to their injuries, taking the total that were killed in action to 20”.
The Indian army said earlier that there were “casualties on both sides”. China s defence ministry confirmed the incident had resulted in casualties but did not give the nationality of the victims or any other details.
Beijing accused Indian soldiers of “attacking Chinese personnel”.
Indian troops “crossed the border line twice… provoking and attacking Chinese personnel, resulting in serious physical confrontation between border forces on the two sides,” China s foreign ministry spokesman Zhao Lijian said Tuesday.
“We again solemnly request that India follows the relevant attitude and restrains its frontline troops,” he added.
New Delhi s foreign ministry spokesman Anurag Srivastava hit back, saying the clash arose from “an attempt by the Chinese side to unilaterally change the status quo” on the border.
India and China have long squabbled about their border but recent weeks have seen an escalation.
On May 9, several Indian and Chinese soldiers were injured in a clash involving fists and stone-throwing at Naku La in India s Sikkim state, which borders Bhutan, Nepal and China.
Alice Wells, the top US State Department official for South Asia, likely irked Beijing last month when she said China was seeking to upset the regional balance and had to be “resisted”.
But the Chinese foreign ministry said only last week a “positive consensus” was reached following “effective communication” through diplomatic and military channels.
India s foreign ministry too sounded conciliatory, saying the two sides would “continue the military and diplomatic engagements to resolve the situation and to ensure peace and tranquillity in the border areas”.
However, Indian sources and news reports suggested that Chinese troops remained in parts of the Galwan Valley and of the northern shore of the Pangong Tso lake that it occupied in recent weeks.
“We are at an extremely worrisome juncture in the relationship,” former Indian ambassador to China and foreign secretary Nirupama Menon Rao told foreign news agency.
India and China have never even agreed on the length of their “Line of Actual Control” frontier, and each side uses different frontier proposals made by Britain to China in the 19th century to back their claims.
They fought a brief war in 1962 in which China took territory from India. Further deadly clashes followed in 1967, but the last shot fired in anger was in 1975, when four Indian soldiers were ambushed and killed along the dividing line in Arunachal Pradesh.
In 2017 there was a 72-day showdown after Chinese forces moved into the disputed Doklam plateau on the China-India-Bhutan border.
After that India s Prime Minister Narendra Modi and Chinese leader Xi Jinping appeared to ease tensions at two summits.
India has also been wary of a Chinese push to gain a strategic foothold in the Indian Ocean Region — one of the busiest maritime routes in the world — which it considers to be in its sphere of influence.
“If not handled correctly this can really escalate into something much bigger than we had initially imagined,” Harsh Pant from the Observer Research Foundation think-tank told foreign news agency of the latest incident, calling China s statement “worrying”.
“China, with its better infrastructure, with its better military capabilities, perhaps thinks that this is the time to push India, to see how far India will go,” Pant told foreign news agency. …Agencies