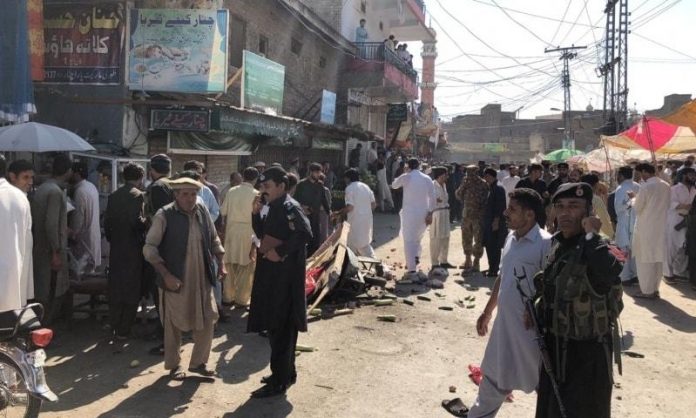 PARACHINAR: At least 20 people, including a child, have been injured in an explosion in Parachinar’s Turi Bazaar, health authorities and police officials said.
Parachinar DSP Najab Ali said that the cause of the explosion was an improvised explosive device (IED) that had been fitted inside a vegetable cart. The area is usually occupied by vegetable and fruit sellers, he said.
Police and security personnel have cordoned off the area. A team from the Bomb Disposal Squad is currently present at the scene and is combing through the area to check for other IEDs.
District Headquarter Hospital (DHQ) Deputy Medical Superintendent Dr Qaiser Abbas Bangash said that at least 17 injured, including a child, were brought to the facility.
He added that one of the citizens injured in the incident was in critical condition and was being shifted to the Combined Military Hospital, Peshawar.
Meanwhile, area residents gathered outside the local press club to stage a protest.
One of the protesters, Zahid Hussain, said that such incidents take place in Parachinar and its surrounding areas again and again and the residents continue to stage protests against them.
He called upon officials to take concrete steps to protect the lives of the people so that such incidents can be prevented.
MNA Sajid Toori, who was elected from the area, said that peace had been established in the region due to the deployment of Pakistan Army personnel.
But a second blast in the area in recent days shows that some elements are trying to ruin the peace in Parachinar, he said. He called upon law enforcement agencies to unmask such elements.
PPP Chairman Bilawal Bhutto-Zardari condemned the incident and expressed concern over the increase in terrorism-related incidents.
“A failure to implement the National Action Plan has encouraged terrorists,” he said, adding that those responsible for the incident should be punished. He also prayed for the swift recovery of those injured in the blast.
Parachinar is the capital of Khyber Pakhtunkhwa’s Kurram district, which is considered one of the most sensitive tribal areas as it borders three Afghanistan provinces. It has witnessed scores of attacks and kidnapping for ransom incidents during the last decade.
In 2017, nearly 132 people were killed and 460 others wounded in five militant attacks in Parachinar. In previous years, militants had carried out 11 bomb attacks that left over 500 dead.