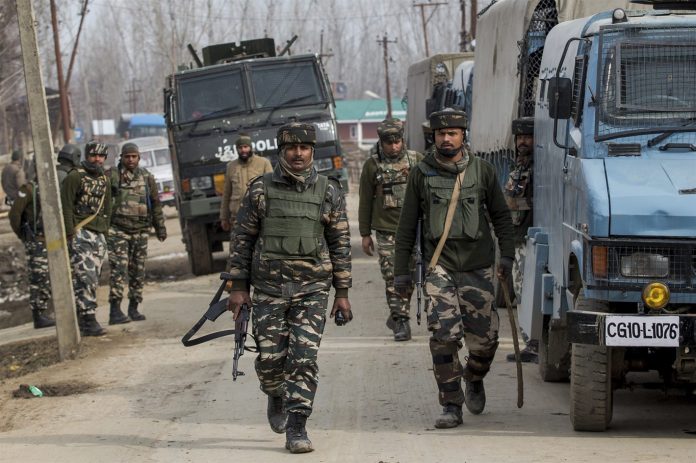 SRINAGAR: Twenty people have been killed in Indian Kashmir in some of the fiercest fighting this year in the restive Himalayan region, police said Sunday, as authorities braced for more violence.
A total of three Indian soldiers and 13 Kashmiri mujahideen died in several clashes south of Srinagar, the main city of the region.
Kashmir has been divided between nuclear-armed India and Pakistan since the end of British colonial rule in 1947, but both claim it in full.
Four civilians were also killed and dozens injured when police opened fire on thousands of demonstrators who poured onto the streets, throwing stones and chanting slogans against Indian rule.
There were also demonstrations in Srinagar, where authorities ordered all schools shut on Monday as Kashmiri mujahideen called for protests.
Seven of the Kashmiri mujahideen were killed along with two soldiers in a protracted shootout in the village of Dragad, where helicopters were seen swooping low over the battle zone.
Another man, described by Indian authorities Kashmiri mujahid, was gunned down in a brief exchange of fire in Dialgam.
Many civilians in Kashmir — India s only Muslim-majority state — support Kashmiri mujahideen who have been fighting for decades for independence or for a merger with Pakistan. Tens of thousands, mostly civilians, have died.
Pakistan — which has fought three wars with India over control of Kashmir — condemned the violence as a “mindless killing spree” and said those slaughtered were innocents.
“Such cowardly actions of the occupying forces only serve to fortify the resolve of the Kashmiri people,” its foreign ministry said in a statement Sunday.
Last year was the deadliest of this decade in the region, with more than 200 Kashmiri mujahideen killed in a counter-insurgency offensive dubbed “Operation All Out”.
That upsurge in violence has escalated in 2018, with 51 Kashmiri mujahideen already killed this year.
The weekend clashes were the worst since a three-day skirmish in the forests of northern Kashmir last month left ten dead — five unidentified Kashmiri mujahideen and five government forces, according to officials.