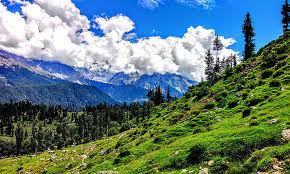 MINGORA: Around 20 tourists were robbed of mobile phones, gold and cash on Monday while they were on their way from Swat to Kalam Valley.

As per reports Police had started an investigation after they were informed that a van of tourists was stopped and robbed at gunpoint in Swat Valley’s Madyan area. The robbers stole nine mobile phones, gold and cash worth Rs400,000 from the tourists before escaping. Police reached the scene of the crime  and launched an investigation, confirmed an official.