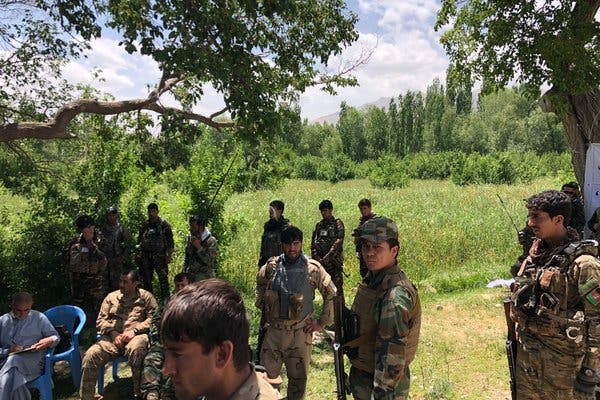 GHAZNI: The Taliban have killed 23 Afghan soldiers in an insider attack in central Afghanistan, the military said on Saturday, underscoring the dangers Afghan forces face from within their own ranks.
The Afghan National Army troops “were martyred by Taliban terrorists in Qarabagh district of Ghazni province” on Friday night, the Afghan defence ministry said on Twitter.
Defence ministry spokesman Fawad Aman later told foreign news agency the troops had been killed by Taliban infiltrators.
Such attacks, sometimes referred to as “green on green,” are a constant threat in the war-torn country for international and Afghan forces alike.
Aman denied a report from a member of Ghazni’s provincial council that 23 Afghan security forces had been killed.
The Taliban, meanwhile, claimed they had overrun an “enemy base” in the Qarabagh district of Ghazni province and killed dozens of security forces.
Friday’s attack underscores the ongoing dangers Afghan and allied forces face from Taliban fighters pretending to be loyal to the government.
On July 29, an Afghan soldier killed two US troops as they were visiting an Afghan army base in Kandahar.
That came two weeks after another Afghan soldier shot and killed an influential Afghan army colonel while he was conducting a security assessment in Ghazni province.
The continued violence comes as the US and the Taliban hold on-again, off-again talks aimed at ending America’s longest war. …Agencies