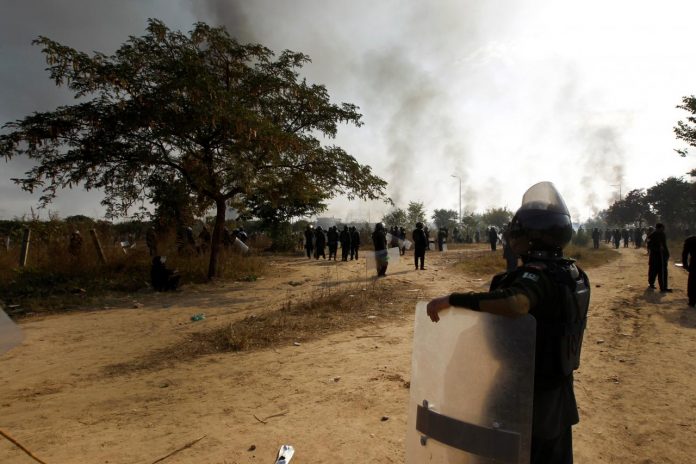 ISLAMABAD: Two people including a police cop were killed and at least 200 people including policemen and Frontier Constabulary (FC) personnel sustained injuries in the operation to clear Faizabad interchange from protesters staging a sit-in.
Heavy contingents of police, FC and Rangers used tear gas and water cannons to disperse the protesters; however, reports said that the was suspended at approximately 1:30 PM.
Meanwhile, protesters attacked and entered the residence of Federal Law Minister Zahid Hamid in Pasrur but at the time of the attack, the law minister and his family were not present at the house.
In a similar incident, protesters entered the residence of former Interior Minister Chaudhry Nisar and set fire to the gate. Nisar and his family were not at the residence at the time of the incident.
Earlier, protesters had broken the gate to the former interior minister’s residence and an armoured personnel carrier belonging to security forces was also damaged.
A building and a mobile satellite van located near Nisar’s residence was also set ablaze.
In yet another incident, Member National Assembly Javed Latif was injured by protesters after he had gone to negotiate on behalf of the government.
Police said there was tension at the time of the negotiations and the lawmaker was safely escorted from the scene of the incident.
“We did not want to take action against the protesters and went to negotiate. I ask God to show these people the right path,” said Latif.
The protesters also attacked media personnel covering the protests across the country.