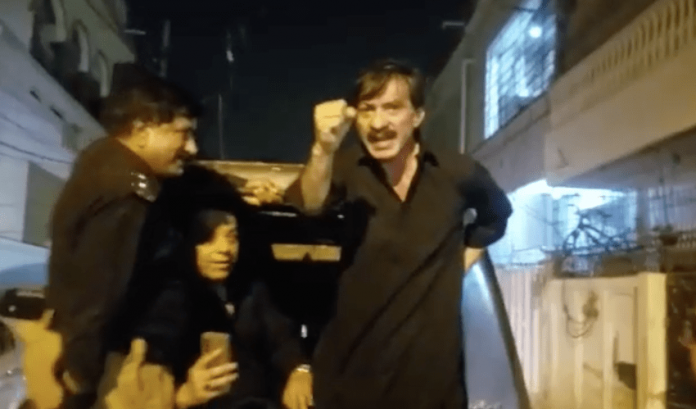 ISLAMABAD— The government “launched a crackdown” on PTI leaders late on Monday night to stop its planned long march towards federal capital Islamabad.

Police in Sindh and Punjab raided the houses of several Pakistan Tehreek-e-Insaf (PTI) leaders and workers and taken its three leaders into custody. late Monday night ahead of the party’s planned long march towards Islamabad.

On Sunday, PTI Chairman Imran Khan announced the party’s long march towards Islamabad on May 25.

However, the police managed to arrest only three key party leaders from the two provinces, while all other were either not present at their homes or managed to evade the arrest. The police rounded up more than 150 PTI workers and booked them under Section 16 of the Maintenance of Public Order or 16 MPO.

The section outlines punishment for those intending to disrupt the public order through their words of action.

In Lahore, the police raided the house of former Finance Minister Hammad Azhar while a meeting of PTI’s central leaders was being held to review the arrangements of March 29 protest.

But the presence of a large numbers of workers provided Azhar a perfect cover to flee the scene and escape the arrest. After their failure to nab Azhar, the police arrested 20 party workers from his house.

In Sialkot, the police raided the houses of Firdous Ashiq Awan and Usman Dar. In Vehari, the police managed to arrest PTI MNA Chaudhry Zafar Iqbal from his house.

In a tweet, PTI leader and former Federal Minister Fawad Chaudhry claimed the police raided the houses of more than 1100 workers and arrested more than 400, including women.

Karachi
The police raided the houses of several PTI leaders and manager to arrest two PTI MNAs from Karachi, Saif ur Rehman and Attaur Rehman.

Ghumman said Sindh police have prepared lists of the party’s leaders and workers, and raiding their houses without any warrant or FIRs.