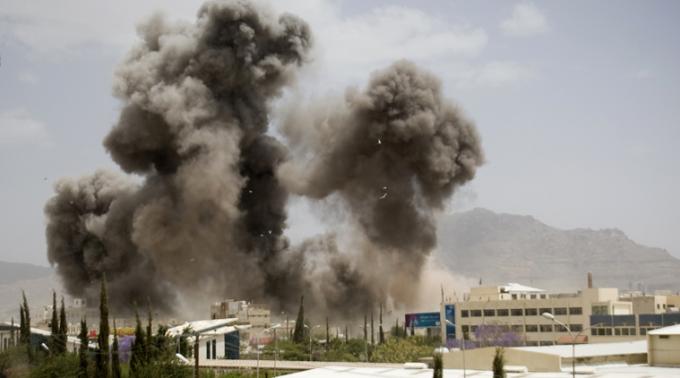 ADEN: A powerful explosion killed seven people outside the residence of Yemeni President Abd-Rabbu Mansour Rabbu Hadi in the southern city of Aden, according to local officials and eyewitnesses. Ten people were injured in the blast.

"A suicide car bomb targeted a security checkpoint about 500 meters (yards) from the Maashiq palace," an official told Reuters by telephone.
"Seven people were killed and 10 were wounded. The majority of the casualties are civilians," the official added.
Locals have reported that the death toll could be as high as 32 people.
The officials said that President Hadi was inside the building at the time of the attack, but was unharmed.
Islamic State (IS, formerly ISIS/ISIL) has claimed responsibility for the blast, according to an ISIS-linked news agency.
The blast occurred just hours after the Saudi-led coalition was reported to have launched an airstrike on the palace and in the country’s capital, Sanaa. The strike lasted for more than two hours, destroying military targets and damaging civilian homes, according to NTV7.
Supported by the US, the Saudi-led coalition has been bombing the Houthi rebels – who control Sanaa – since March 2015.
The coalition sides with exiled President Hadi while the Houthis are aligned with former President Ali Abdullah Saleh, who resigned in 2012 following a popular uprising against his rule.– Agencies