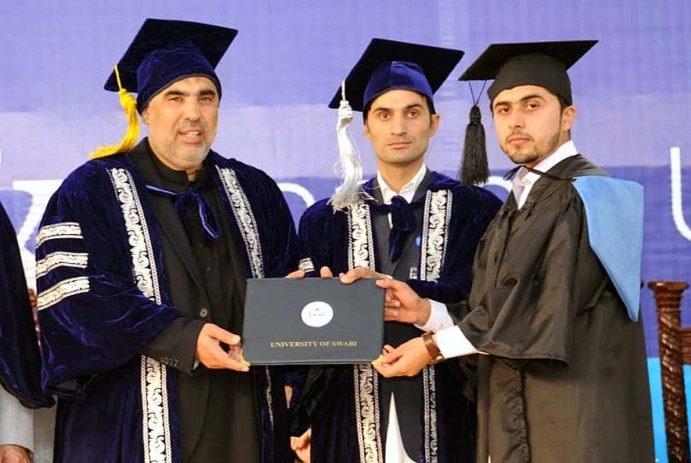 SWABI: A total of 710 graduates were awarded degrees and 190 were given medals for distinctive performance at the first joint convocation of the University of Swabi and Women University Swabi here on Monday.
Chief Minister Khyber Pakhtunkhwa Mahmood Khan was the chief guest on the occasion, while Speaker National Assembly Asad Qaiser was the guest of honour. Together with the vice-chancellor, University of Swabi Prof Dr Imtiaz Ali Khan, who also holds additional charge as vice-chancellor Women University Swabi, he distributed the degrees and awards among the graduates.
The graduates included 370 from the University of Swabi and 340 from Women University Swabi. The ceremony had been arranged at the spacious multi-purpose hall at the new campus of the university, which was attended by several participants including members of parliament, government officers, faculty members of different universities, the new graduates and their parents.
Speaking on the occasion, the chief minister announced a grant worth Rs100 million and construction of link roads to the university. He said that this was the lone university where he was making announcements of funds as before he had gone to different institutions where he did not announce anything. The chief minister also assured that all the demands made by the administration of the university would be accommodated in the next budget. Mahmood Khan congratulated the university administration, the graduates and their parents for their achievements. He specifically lauded the services and interest of Speaker National Assembly Asad Qaiser in establishment and promotion of the two universities.
In his speech on the occasion, Vice-Chancellor Dr Imtiaz Ali Khan greeted the graduates and their parents on securing the milestone achievement in their academic career. He also presented a report on the performance of the two universities. He said that the two universities were getting the honour of arranging a joint convocation.About the University of Swabi, he said that he joined the university in June 2017 and by the time there were only 13 departments in the university where a total of 1100 students had been enrolled. During the two and a half years of his service as vice-chancellor, 17 new departments were established in the university and the number of students jacked up to 5,000. Currently, nine of the departments are offering MPhil and PhD programmes, while 12 are imparting master’s level education, he said.
More PhD faculty was hired to improve the academic and research standard in the university. Previously there were just 44 PhD teachers in the university, but the number has now jumped up to 75, which is almost double, he informed. He further said that the university has offered scholarships to 850 students during his stint as vice-chancellor. Also, seven international and 19 national conferences have been arranged in the university, he added.
The vice-chancellor said transparency and merit have been ensured in running the university affairs especially hiring of faculty and other staff.
He said that construction work worth billions in the new campus of the university is near completion, while several other projects have been completed so far.
The vice-chancellor also spoke in details about the Women University Swabi. He said that the academic and research activities in the Women University have also gained momentum. Very recently, 50 new faculty members were recruited and more regular recruitment would be made soon.
Also, the transport system in the university was improved, more tours were arranged for the female students and construction work on the new campus of the university has been expedited.