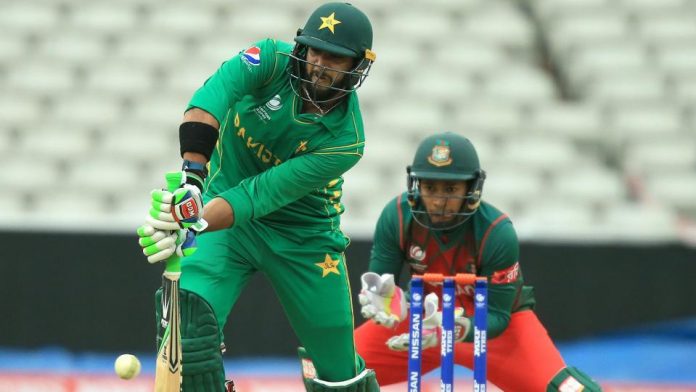 BIRMINGHAM: Pakistan rode brilliant batting performances from Shoaib Malik and Fahim Ashraf to beat Bangladesh by 2 wickets in their ICC Champions Trophy warm-up encounter in Birmingham on Saturday.
Shoaib Malik (72 off 66 balls) provided the perfect foundation for the run chase and Fahir Ashraf scored an unbeaten 64 off just 41 balls to clinch the match for Pakistan.
Chasing a huge target of 342, Pakistan were off to a rocky start after they lost Azhar Ali and Babar Azam within the first five overs of their innings. However, Ahmed Shehzad and Mohammad Hafeez steadied the innings and both the batsmen were unlucky to miss out on their fifties by fine margins.
Pakistan kept losing wickets at regular intervals and although Shoaib Malik (72 off 66 balls) was steady on one end, it seemed that he will run out of partners. But, Imad Wasim provided the perfect support to Malik and the pair put Pakistan in the driver’s seat. Bangladesh were able to dismiss both of the batsmen, but a late flourish from 23-year old Fahir Ashraf was enough to clinch the game for Pakistan.
The all-rounder slammed 4 fours and 4 sixes in his exciting innings and along with Hasan Ali (27 off 15 balls), he was able to control his nerves to guide his team to victory.
Earlier, Tamim Iqbal’s scintillating century took Bangladesh to a heavy duty total of 341/9.
Opting to bat, Bangladesh took off well with Tamim and Soumya Sarkar. Though Sarkar was the more aggressive of the two, he perished for 19.
Tamim struck a fantastic 142-run partnership with Imrul Kayes (61) to give Bangladesh the platform to put up a big total. Both Kayes and Tamim scored at run-a-ball with Kayes striking eight boundaries in his 62-ball knock.
Tamim had decided that he will play the anchor’s role and kept rotating the strike. But once Kayes got out, the left-hander upped the ante to hammer the Pakistani bowlers all over the ground.
Tamim ended up hitting nine boundaries and four massive sixes for his 93-ball 102 before getting out in the 34th over.
The Bangladeshi middle-order, however, did not lose the momentum with wicketkeeper-batsman Mushfiqur Rahim (46), all-rounder Shakib Al Hasan (23), Mahmudullah (29) and Mossadek Hossain (26) chipping in with valuable contributions which took the Bangladeshi total close to the 350-run mark.
Pakistani bowlers struggled throughout the innings. Though they picked up wickets at regular intervals towards the end, the damage had already been done.
Left-arm pacer Junaid Khan picked up wickets but also gave away 73 runs from his nine overs. Fast bowler Hasan Ali and leg-spinner Shadab Khan also scalped two wickets each.