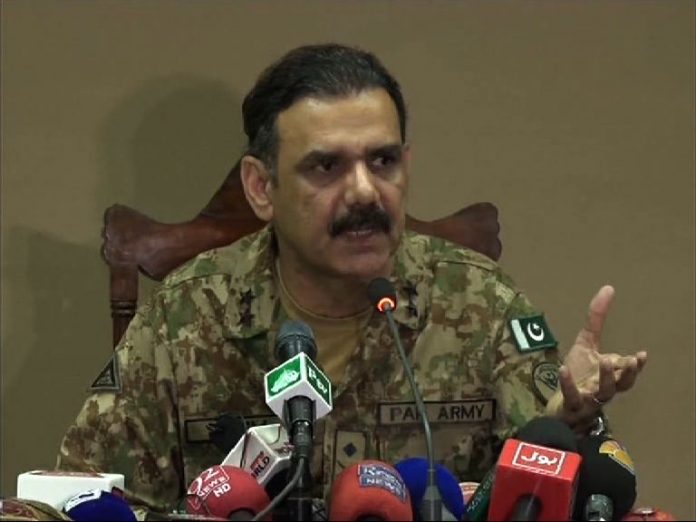 RAWALPINDI: At least 900 terrorists so far killed in the ongoing military operation in Khyber Agency and network of the militants has been dismantled, says Director-General (DG) Inter-Services Public Relations (ISPR) Asim Bajwa on Thursday.
Asim Bajwa was briefing the media on progress made during Zarb-i-Azb operation.
He informed that 537 personnel embraced martyrdom, while 2272 others injured during Operation Zarb-e-Azb.
Recalling situation in the North Waziristan before launching Zarb-e-Azb , Bajwa says”No one could think of going to North Waziristan. It was the epicentre [of terrorism]. It was home to the largest communications infrastructure.” The origin of most instances of terrorism was North Waziristan, he said.
“After the operation, when we cleared the valley, reaching Dattakhel and were moving towards the border, some terrorists came out from there via Afghanistan and reached the fringes of Khyber Agency.”
“When the terrorists went towards Khyber Agency, we relocated some forces from the North Waziristan operation [to Khyber] and conducted operations Khyber I and Khyber II.”
“We recovered weapons, ammunition, IEDs, explosives, communications equipment, hate literature and discovered tunnels,” he said.
North Waziristan has very challenging terrain but despite that, our armed forces went there and cleared all their hideouts, caves and tunnels. But Khyber was even more challenging. It has snowy mountains and was home to hideouts from the Afghan war and had a very high density of IEDs.”
Elaborating the current security situation of the country, DG ISPR said that only in 2014, the security environment when Operation Zarb-i-Azb started was such that the country faced various instances of terrorism,” he said. “There were 311 IED blasts, 74 attacks, and 26 suicide blasts.
DG ISPR said that Afghanistan didn’t take necessary steps against terrorists despite leads provided by Pakistan. “Pakistan and Afghanistan have 18 crossing points at border and gates will be constructed there as part of a security measure,” said Bajwa.