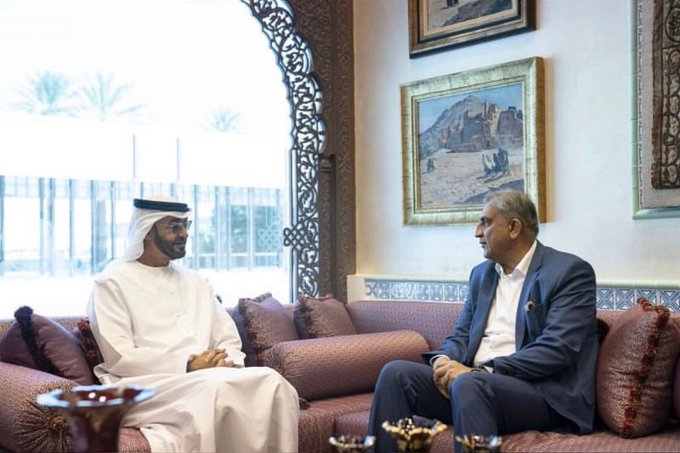 ABU DHABI: Abu Dhabi Crown Prince, Sheikh Mohammed bin Zayed Al-Nahyan, discussed means of enhancing cooperation between Pakistan and the United Arab Emirates (UAE) in a meeting with Chief of the Army Staff General Qamar Javed Bajwa on Saturday.
According to the UAE embassy in Islamabad, the army chief was received by the Deputy Supreme Commander of the UAE Armed Forces.
In the meeting between Crown Prince Zayed Al-Nahyan and the army chief, ways to enhance cooperation between the two countries were discussed.
The UAE embassy’s account tweeted: “His Highness Sheikh Mohammed bin Zayed Al Nahyan, Deputy Supreme Commander of the #UAE Armed Forces, Crown Prince of Abu Dhabi, receives General Qamar Javed Bajwa, the Chief of the #Pakistani Army, and discusses with him the ways to enhance cooperation between the two countries.”
Director General Inter-Services Public Relations Major General Asif Ghafoor said that the army chief arrived in the UAE today.
In a tweet, the DG ISPR said that regional security and matters of mutual interest were also discussed in the meeting.