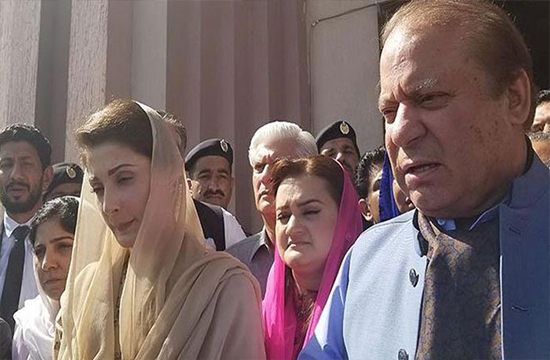 ISLAMABAD: The Accountability Court hearing Avenfield reference against former Prime Minister Nawaz Sharif, Maryam Nawaz and their family members on Friday rejected one-week exemption plea of Nawaz and Maryam. The court allowed to make NAB director general as witness in the reference against Sharif family.
Accountability court is continuing hearing of Avenfield reference.
During the proceedings headed by Justice Mohammad Bashir, defence lawyer Amjad Pervez submitted a plea seeking exemption of ex-prime minister Nawaz Sharif and his daughter Maryam Nawaz from court appearance for seven days as they are in London to visit ailing Begum Kulsoom.
Earlier on Wednesday, Nawaz Sharif and his daughter left for London to inquire about the health of Begum Kulsoom Nawaz who is undergoing cancer treatment at a hospital in Britain’s capital.
All the rallies of PML-N have also been postponed. Nawaz and Maryam were to address gatherings in Lala Musa on April 20, Sahiwal on April 21and Mansehra on April 22. The new dates for the rallies will be announced later.
Maryam Nawaz had tweeted that they will be returning back before next proceedings if their request not granted.