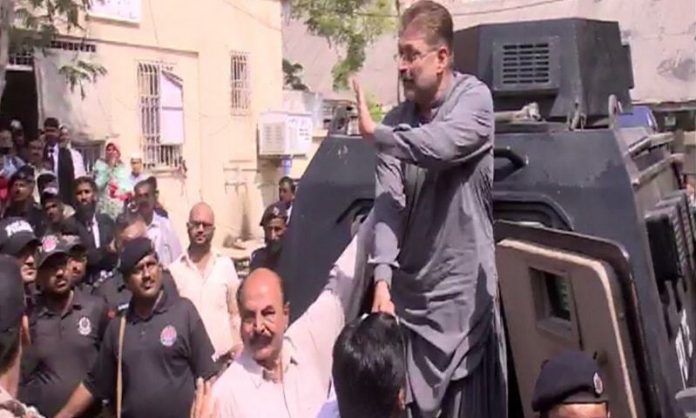 KARACHI: An accountability court on Tuesday sent Pakistan People’s Party (PPP) leader Sharjeel Memon to jail on four-day judicial remand in a multi-billion corruption case.
The National Accountability Bureau (NAB) on Monday arrested Sharjeel Memon after the Sindh High Court rejected his bail plea.
A statement was also issued by the NAB after the arrest of Memon.
According to the statement, 12 people including Sharjeel Memon are charged with embezzlement of Rs 5.76 billion during 2013 and 2015.
The Sindh High Court dismissed the protective bail of former information minister Sharjeel Inam Memon, information department officials and advertisement companies’ representatives in Rs5.76 billion corruption case.
Sharjeel Inam was later on arrested by the NAB from the court premises along with other co-accused as the SHC turned down the request of Sharjeel’s counsel to suspend the bail rejection order to enable Memon to approach the Supreme Court against the bail rejection order.
The former information minister was booked by the NAB in a corruption reference along with information department officials and advertising companies’ representatives for allegedly committing corruption in the award of advertisements of provincial government’s awareness corruption in the award of advertisements of provincial government’s awareness campaigns in the electronic media involving over Rs5 billion.