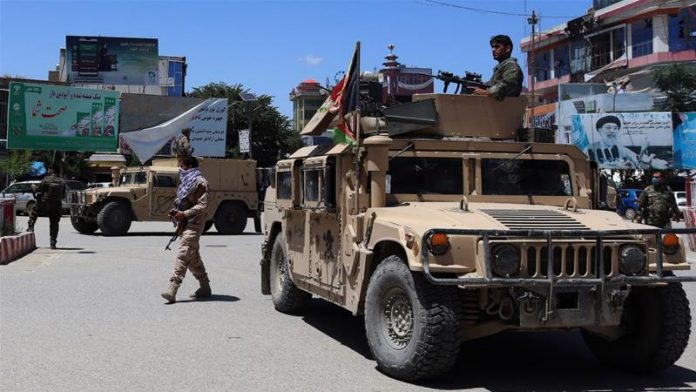 KUNDUZ: A fierce attack from Taliban on Kunduz was repelled by Afghan security forces on Tuesday, officials said.
Kunduz is a strategic city in northern Afghanistan that had briefly fallen to the militants twice in the past.
Taliban fighters attacked several outposts of Afghan forces on the outskirts of the city at around 1:00 am, triggering fierce fighting, a defence ministry statement said.
“With the support of air force their attack was repelled. Eleven Taliban were killed and eight wounded,” it said, adding that the fighting lasted for several hours.
Both sides have repeatedly clashed in rural areas in recent months, but an attempt to enter a city like Kunduz is seen as a serious escalation.
It follows a declaration by President Ashraf Ghani last week to resume offensive strikes against the insurgents, after a string of brutal attacks.
The Taliban responded to the order by vowing to increase attacks against Afghan security forces.
During Tuesday’s fighting, the insurgents managed to briefly capture an Afghan army post, killing one soldier, but it was quickly retaken by security forces, Hadi Jamal, an army spokesman in northern Afghanistan told AFP.
The Taliban were not immediately available for comment.
The insurgent group briefly captured Kunduz, a strategic city not far from the Tajikistan border, twice before — in September 2015 and again exactly a year later.
The latest attack on the city came a day after the Taliban killed at least seven Afghan intelligence personnel in a car bomb attack in the eastern province of Ghazni.
Last week, gunmen stormed a hospital in Kabul killing 24, including mothers and infants.
That attack, which triggered international outrage, was followed by a suicide bombing at a funeral which killed at least 32 mourners.
The Taliban denied involvement in those attacks, although Ghani blamed the militants and Daesh for the bloodshed.
Officials say the assaults are part of the Taliban’s undeclared spring offensive.
Violence has spiked since the Taliban signed a deal with Washington in February, under which Washington said it would pull its troops out of the country.
The Taliban have carried out more than 3,800 attacks and killed 420 civilians and wounded 906 since signing the deal with Washington, officials say. …Agencies