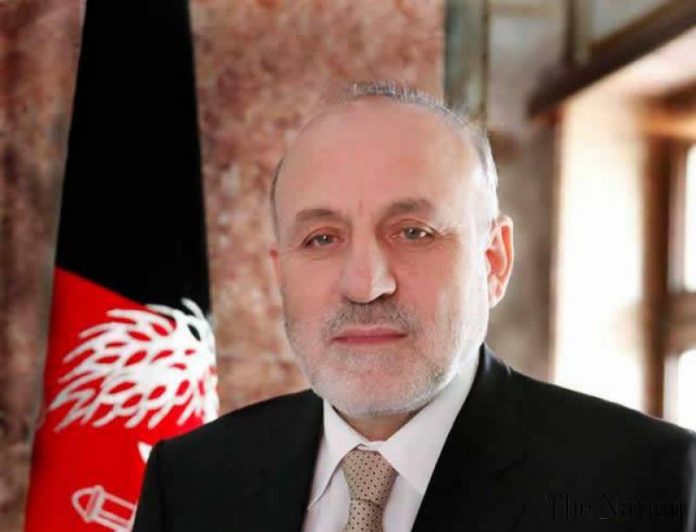 KABUL: Afghan President Ashraf Ghani has appointed senior leader Mohammad Umer Daudzai as his special representative for Pakistan, a presidential announcement said.
Daudzai has served as Afghanistan’s ambassador to Pakistan and Iran, interior minister and chief of staff to former President Hamid Karzai.
Sources in Kabul say Daudzai’s main responsibility would be coordination with Pakistan on the peace process and to explore ways for improving relations between the two countries.
This is the first time Afghanistan has appointed a special representative for Pakistan, who will be based in capital Kabul.
President Ghani appointed his special envoy for Pakistan weeks after Pakistan also appointed Mohammad Sadiq as Prime Minister’s Special Representative for Afghanistan.
Appointments of special envoys by leadership of the two countries would be helpful to bring the tense relationship back on track at a time when their cooperation is required for the peace process.
Kabul’s refusal to release hundreds of more Taliban prisoners has created hurdles for the intra-Afghan dialogue. Afghan officials claimed nearly 600 Taliban prisoners are involved in murder and other major crimes and the government cannot free them.
Who is Daudzai: Daudzai was born on October 12, 1957 in the Shomali valley, north of Kabul city, to a locally prominent and religious family in the Qarabagh District of Kabul Province.
From August 2003, Mr. Daudzai was invited by President Hamid Karzai to serve as the Chief of Staff to the President. He served in this position until 2005 when he was appointed as Ambassador to Iran.
In January 2007, he returned to assume his positions as the Chief of Staff to President Karzai for a second term and he remained in this position until 2011 when he moved on to assume the role of Afghan Ambassador to Pakistan in order to assist with the peace process.
He returned to Kabul in August 2013 and was voted by the Afghan Parliament as Minister of Interior to oversee security and political transition of 2014. He left the position of the Minister of Interior in December 2014 after serving under President Ghani for two months.
Mr. Daudzai then became fully active in the political arena where he led a wide range of youth, tribal and religious networks. He was considered one of the more serious potential presidential candidates for the presidential elections 2019. He is a founding member and head of the Political and International Relations committee of the country’s major political coalition called the Afghanistan Protection and Stability Council APSC.
Mr. Daudzai attended the Doha meeting in late January 2016 where he met face to face with the Taliban’s political representatives. As a follow up to the Doha meeting Mr. Daudzai together with a number of prominent elite politicians and tribal elders formed the Afghan Peace Jirga to mediate between the Afghan Government and the Taliban. The High Peace Council and the Taliban Qatar office have endorsed the role of the Afghan Peace Jirga to mediate. At a very critical stage in 2018, President Ghani invited Mr. Daudzai to become his Special Envoy for Regional Consensus building and to head the Secretariat of the High Peace Council. In anticipation of the presidential election 2019 he accepted president Ghani’s invitation to head his campaign as the presidential candidate.
He was Chief of President Ghani’s Campaign in presidential election 2019. He served from September 2018 to July 2019 as President’s Special Envoy for Regional Consensus Building on Peace in Afghanistan and Head of Secretariat to the High Peace Council HPC.
From August 2013 up to December 2014, Daudzai had served as Minister of Interior, during the challenging Afghan presidential election, 2014.
He served Afghan Envoy to Pakistan from April 2011 to August 2013 soon after the appointment of the High Peace Council to lead dialogue with Taliban. President Hamid Karzai dispatched Daudzai as Special Envoy to Pakistan to secure Pakistan’s cooperation in the peace process. He served as the Afghan Ambassador in Pakistan for two years.
During the Soviet invasion of the 1980s, he joined the Hezb-e-Islami Party and actively participated in the Anti-Soviet resistance. Upon leaving the party, he began to work as a humanitarian worker with international aid organizations such as Save the Children Fund and Swedish Committee for Afghanistan and ultimately he joined the United Nations in 1996. In 2001, he moved to Geneva, Switzerland where he worked until 2003 as a development specialist for UNDP.