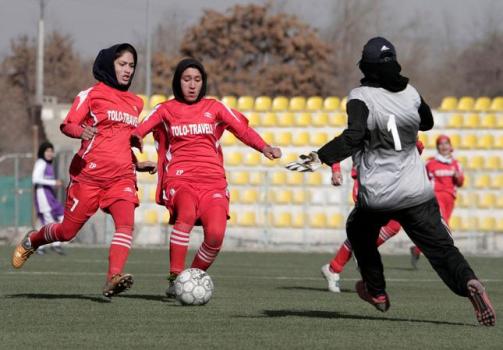 KABUL: Afghan President Ashraf Ghani on Tuesday called for an investigation into claims of sexual abuse against the national women’s football team, calling the allegations “shocking” and vowing to act immediately.
The president’s call comes days after The Guardian newspaper broke a story about allegations of sexual and physical abuse of members of the women’s team by male officials, including the president of the country’s football federation.
“It is shocking to all Afghans. Any kind of misconduct against athletes, male and female, is not acceptable,” Ghani said after a meeting with the country’s attorney general.
“I ask the attorney general to conduct a thorough investigation compliant with our legal codes into the issue,” he added.
The Guardian cited what it described as senior figures associated with the women’s team who said the abuse had taken place in Afghanistan, including at the Afghanistan Football Federation (AFF) headquarters, and at a training camp in Jordan last February.
The story quoted former captain Khalida Popal — who fled the country after receiving death threats and has spoken out previously about the discrimination women face in Afghanistan — as saying male officials were “coercing” female players.
AFF Secretary General Sayed Alireza Aqazada batted away the allegations over the weekend, saying the claims were untrue. However, Hafizullah Wali Rahimi — president of Afghanistan’s Olympic committee — said such allegations were not new.
“The abuse by the head of federations, trainers and sportsmen have always existed. We have had complaints in the past, and this is an undeniable fact,” Rahimi told local media on Monday.
“Even if mere allegations cause our people to stop sending their sons and daughters to sports, we need to act immediately and comprehensively. I do not tolerate sexual abuse,” Ghani said.
“No power on Earth can abuse our children. We have to have a framework in place to mitigate such incidents in our sports federations,” he added.
Football’s world governing body FIFA has also said it was looking into claims of sexual and physical abuse in the Afghan national women’s team, while the Danish sportswear company Hummel announced it had cancelled a sponsorship deal with the team due to the allegations.
The attorney general’s office said it had already assembled a team to investigate the issue.
Afghanistan has made strides to promote female football and launched its first all-women’s football league four years ago that ran in parallel with the men’s. In 2017 the female teams were sidelined by a lack of funding.