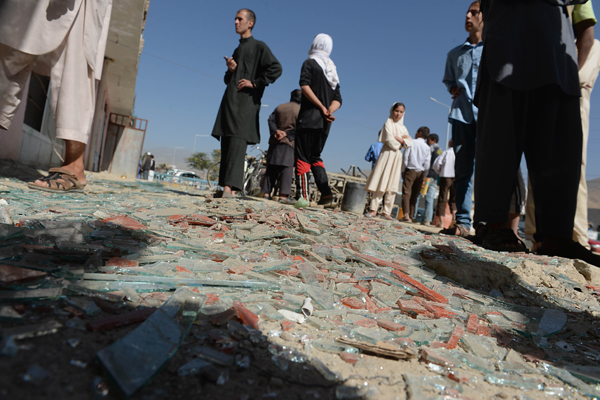 KANDAHAR: At least 35 people were killed Sunday when a passenger bus collided with a fuel tanker and burst into flames in southern Afghanistan, in the latest road accident in the war-torn country.
Many of the victims, including women and children, were burned beyond recognition in the accident in Zabul province, one of the areas worst affected by the Taliban insurgency.
“The passenger bus was on its way from Kandahar to Kabul when it collided with a fuel tanker in Jildak area of Zabul,” provincial governor Bismillah Afghanmal told a foreign news agency.
“In the accident, 35 people were killed and more than 20 others were wounded.”
Some of the injured were rushed to hospitals in provincial capital Qalat as well as neighbouring Kandahar province, said Ghulam Jilani Farahi, deputy Zabul police chief.
The Kabul-Kandahar highway passes through militancy-prone areas and many bus drivers are known to drive recklessly at top speeds so as not to get caught in an insurgent activity.
Afghanistan has some of the world’s most dangerous roads, often in dilapidated condition and traffic rules are seldom enforced.Many in the country rely on old and rickety passenger vehicles, meaning that high casualty road traffic accidents are common.
In May at least 73 people were killed Sunday when two passenger buses and an oil tanker burst into flames in a head-on collision in eastern Ghazni province, in one of the worst road accidents in the war-battered nation.
And in April 2013 a bus hit a wrecked fuel tanker in the southern province of Kandahar, killing 45 people.
Insecurity is growing across Afghanistan as the Taliban press on with their 15-year insurgency against the Western-backed Kabul government.
The Taliban have also closed in on Kunduz — the northern city they briefly seized last year in their biggest military victory so far — leaving Afghan forces stretched on multiple fronts….Agencies