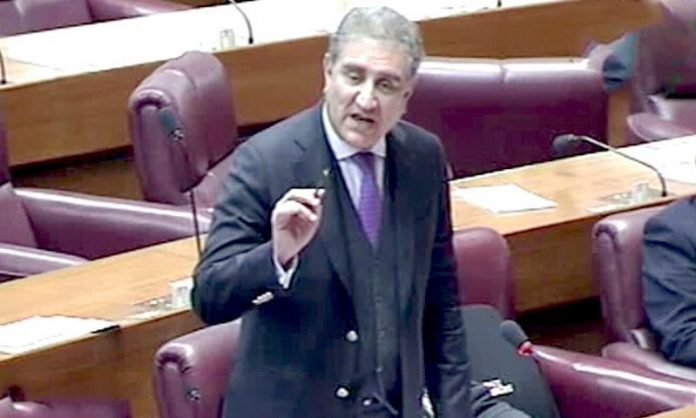 ISLAMABAD: Foreign Minister Shah Mehmood Qureshi Monday claimed that Afghan Taliban are ready for sitting on negotiating table for peaceful solution to Afghan crisis, which is a positive progress.
Addressing the National Assembly session here, he said that regional peace was linked with the peace and stability in Afghanistan, adding that Pakistan was playing its role in facilitating the Afghan peace process. He said that further progress was expected at the Oslo Afghan peace conference.
Qureshi said Pakistan was not supporting any specific group in Afghanistan, adding that President Ghani was apprised of our purposes in Afghan peace process. He said that Afghan president Dr Ashraf Ghani visited Pakistan after four years.
The foreign minister said that Zalmay Khalilzad has also recognized the role of Pakistan in Afghan peace process. He said, “we have convince the President Trump that peace process has moved forward”. He said PM Imran kept on saying that peace in Afghanistan is possible only through dialogue. He said the stance of US government towards Pakistan has changed during 11 months of incumbent government. He maintained that some elements across the border were trying to harm peace in the region.
He said that the entire Pakistani nation will have to come together for national interest in order to support the government’s efforts to create a favourable environment for peace in the region.
“We may have 100 differences of political nature but there is no difference in this nation on Pakistan’s borders, geography, ideology and defence,” Qureshi said.
The minister said Pakistan should proceed with the same unity as shown by the parliament in response to Indian aggression in February. “The world expects Pakistan to reaffirm that we are one nation with one objective [and] we desire peace and stability because our own peace and stability is linked to Afghanistan’s peace and stability.
He said the government welcomed the opposition’s suggestion to debate the matter and in this regard, he had called a session of the NA foreign affairs committee. The minister said he would take the committee in confidence on the full context, substance and content of Prime Minister Imran Khan’s recent visit to the United States.