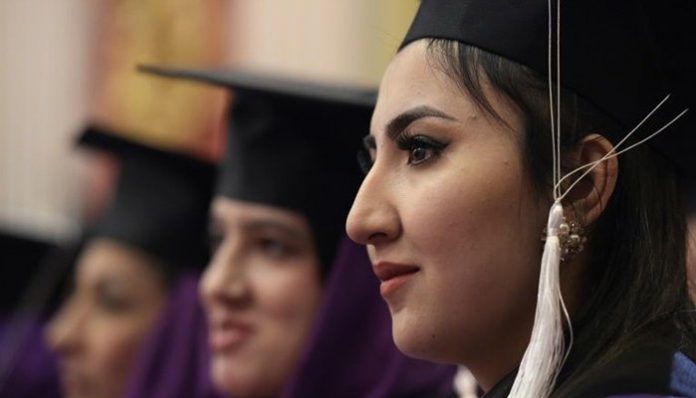 KABUL: Afghanistan’s first graduates in women’s studies donned caps and gowns on Sunday to collect their unusual qualifications in the patriarchal country.
Kabul University is the country’s first higher education institute to offer a degree focused on gender and women’s issues, according to the United Nations Development Programme and university officials.
Feminist theories, media, civil society and conflict resolution were among the largely women-focused topics covered in the two-year Master’s course, funded by South Korea and run by the UNDP.
Offering such a degree would have been unthinkable during the Taliban’s repressive 1996-2001 regime, when female issues were taboo and women were largely confined to their homes and banned from education.
While protection of women’s rights has improved since a US-led invasion toppled the Taliban, they remain second-class citizens in the male-dominated country.
Among the 22 graduates were seven men, including Mujtaba Arefi.
“This is the beginning of a change,” Arefi told foreign news agency as he waited to receive his certificate.
“With these programmes, we can understand the women’s place and status in our society. There is the possibility that we will reach a level of gender equality like the West.”
Another graduate, Sajia Sediqqi, said she hoped her classmates would use their degrees to improve the situation of women in Afghanistan.
“In a short period of time we cannot bring about any dramatic change, but with our higher education we can help change our society and serve our people, particularly our women.” …Agencies