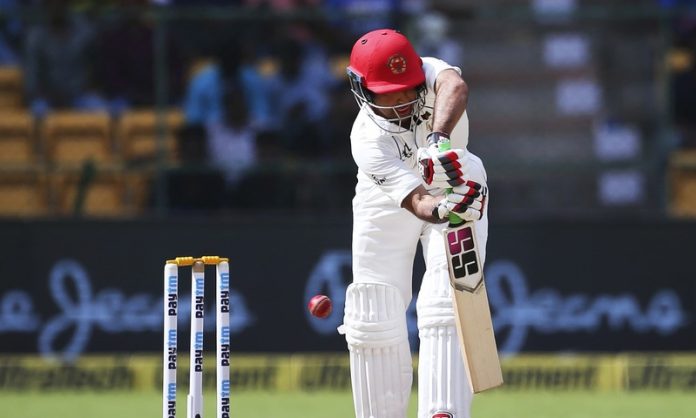 Afghanistan’s fairy tale entry into Test cricket ended in a bruising defeat inside two days by world number one team India on Friday.

India bowled Afghanistan twice in less than a day as they completed a crushing innings and 262 runs win over the outclassed debutants.

Cricket has become the national sport of the country torn apart by decades of war but the first five-day game turned into a Test of fire.

Ravindra Jadeja took four wickets as India skittled out Afghanistan for 103 in the final session while following on at Bangalore’s M Chinnaswamy Stadium.

The second innings lasted just 38.4 overs with Hashmatullah Shahidi top-scoring with an unbeaten 36.

Earlier the Afghans fell for 109 in their first innings, in 27.5 overs, in response to a formidable Indian score of 474.

It was the 21st time that a Test had finished inside two days and just the fourth that a team was bowled out twice in a day.

“I am surprised as we have a very good team,” said Afghan skipper Ashgar Stanikzai.

“Test cricket is totally different from T20 and one day matches. But this was good for us and good for the future,” he added.

Hashmatullah Shahidi stuck around for 88 balls trying salvage some pride by taking the match into a third day but the Indian bowling was unforgiving.

Ravindra Jadeja returned figures of 4-17 after Ashwin had also got four wickets in Afghanistan’s first innings.

The Afghan players, many of whom learned their cricket in refugee camps in Pakistan, got a bitter taste of the rigours of the five-day game early on day one.

Openers Shikhar Dhawan and Murali Vijay laid the foundations of the big win during with a 168-run partnership on day one that exposed the inexperience of the Afghan bowlers.

Dhawan, who hit a merciless 107, and Vijay, who made 105, hit the Afghan spinners including teen sensation Rashid Khan to all parts of the ground.

But Hardik Pandya’s aggressive 71 kept the hosts in control of the one-off game played in a virtually empty stadium.

Afghanistan were only made full members of the International Cricket Council last year along with Ireland, who lost their debut Test to Pakistan last month.