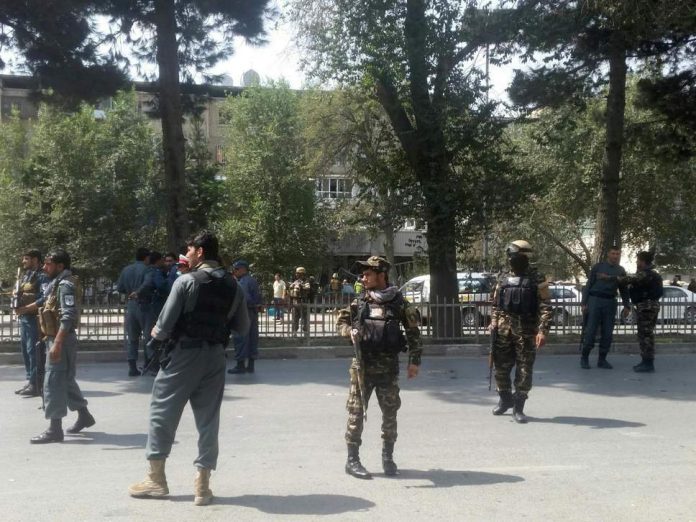 KABUL: Afghan authorities were struggling on Wednesday to identify the group behind a suicide bomb attack that killed at least 55 people at a gathering of religious scholars in Kabul after the Taliban denied any responsibility.
The victims included religious delegates from various parts of the country, invited by the Afghan Ulema Council to celebrate the birth anniversary of Prophet Mohammad (Peace Be Upon Him) on Tuesday.
Without knowing who was behind the attack, it was unclear whether the aim was to undermine President Ashraf Ghani’s government, or whether it was part of a strategy to keep the pressure on his government and its Western allies while they pursued talks with the Taliban, to end the 17-year long war.
“As of now we don’t know which militant outfit could be behind the attack. Investigations are at a preliminary stage,” said a senior security official who was at the blast site on Wednesday to collect forensic evidence.
Taliban and Daesh fighters have targeted religious scholars aligned with the Afghan government in the past.
This time, the Taliban quickly denied responsibility and condemned the attack on religious preachers and scholars, but investigators in Kabul said the hardline group’s involvement cannot be ruled out.
The toll from Tuesday’s attack could rise as most of the 80 wounded had severe injuries, hospital and government officials said.
On Wednesday, two rockets hit Ghazni city where the top US general leading the NATO-led force in Afghanistan, Scott Miller, was meeting the provincial governor and senior officials at the governor’s compound, said Ahmad Khan Serat, a spokesman for Ghazni police.
“Gen. Miller was not hurt in the rocket attack,” Serat said, adding that two rockets fell on a money exchange market, about 200 metres (656 ft) from the governor’s compound in the central strategic province.
Debra Richardson, a spokesperson for the NATO-led Resolute Support mission, said Miller was in Ghazni province for a meeting with Afghan military leadership to discuss security.
“While he was there, the Taliban indiscriminately launched indirect fire but we do not believe General Miller was the target,” Richardson said in a statement.
No militant group has claimed responsibility for the rocket attack in Ghazni.
In October, Miller survived an attack by a Taliban fighter in the southern province of Kandahar in which a legendary Afghan police general and the local intelligence chief were killed, and two Americans were wounded.
Last week, Taliban leaders met US special envoy Zalmay Khalilzad at their political headquarters in Qatar in an effort to pave the way for peace talks. The three-day meeting was the second in the past month.
Khalilzad has declared a deadline of April 20, the day of Afghanistan’s presidential election, to end the war, but the country’s security situation has worsened since NATO formally ended combat operations in 2014.– Reuters