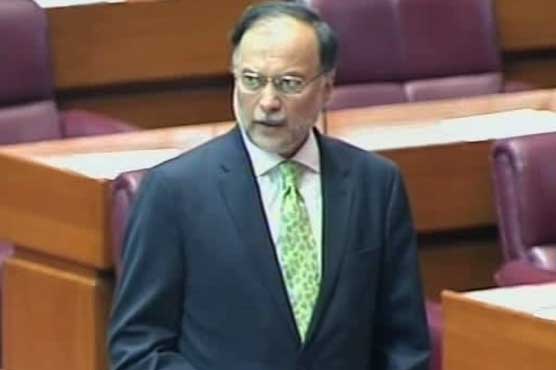 ISLAMABAD: Minister for Interior Ahsan Iqbal on Friday stressed for strengthening unity among all ranks to completely efface the menace of terrorism from the country.
Speaking in the National Assembly regarding suicide blast at Dargah Fatehpur Sharif near Gandawa area of Jhal Magsi district, he stressed the need for showing complete solidarity and unity to fight the war against terrorism and called upon political parties to join hands to defeat enemies of the country.
During the last four years, Pakistan had achieved significant successes in the war against the terrorism, he said and added some elements were entering from across the border and hitting the soft targets in the country.
“Such cowardly attacks cannot create fear and defeat the people. Our enemy is not familiar that these attacks would further enhance courage and determination of people,” he said.
The minister said during the last four years, the government had successfully launched operations ‘Zarb-e-Azb’ and ‘Rudd ul Fasaad’ which helped to stamp out terrorism from the country.
The Minister said eradication of terrorism from the country was a prerequisite for prosperity and development of the country.
The minister said that provincial government had been asked to submit comprehensive report at earliest about Jhal Magsi incident. He said the federal government with the cooperation of provincial government will announce compensation for the victims.
About the finality of the prophethood, he said that text of nomination papers in the Elections bill 2017 had been restored to its original shape. He made it clear that here had been no bad intention of Election Reforms Committee.
“Finality of prophethood cannot be comprised by the Muslims”, he added.
He also appreciated the gesture, shown by the all political parties for consensus to bring the nomination papers to its original format.
Ahsan Iqbal said, the Constitution is based on Islamic teachings. “It has been enshrined in the Constitution that no law can be enacted against the spirits of the Islam tenets”, he added.
He said it was not the right of the any individual to issue decree and declare any person non-Muslim or to do politics in the name of religion. – APP