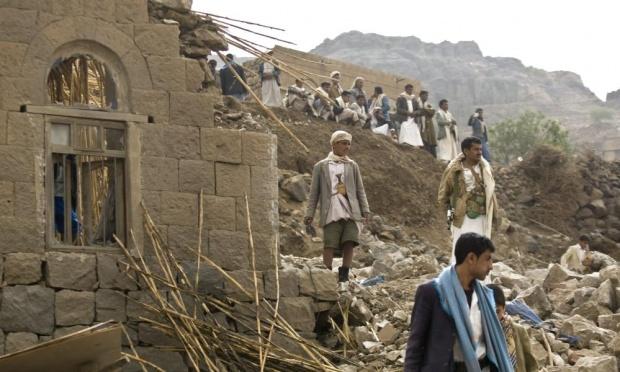 SANAA: Saudi-led air strikes killed 15 people and wounded dozens across Yemen late on Saturday, the Houthi-run Saba news agency reported.
The dead included five women and two children in attacks on Saada and Marib provinces, the agency said.
A Saudi-led Arab coalition has been bombarding Houthi rebels and allied army units since March 26 in a campaign to restore President Abd-Rabbu Mansour Hadi to power.
Hadi, Riyadh’s ally, was pushed aside last year when Houthis advancing from their northern strongholds overran the government in the capital Sanaa and went on to capture lands to the south.
The Houthis are allied to former president Ali Abdullah Saleh, who still has the loyalty of much of the army.
United Nations-sponsored talks in Geneva between Yemen’s warring parties ended on Friday without agreement on a ceasefire, an outcome relief agencies had sought in order to support efforts to stave off what many see as a humanitarian disaster.
More than 2,800 people have been killed since March 26. The United Nations says more than 21 million people, or 80 per cent of the population, are now estimated to be in need of some form of humanitarian aid, or protection, or both.
A series of coordinated bombings claimed by Islamic State has adding another layer to the conflict.
In the latest, Islamic State said it was behind a car bomb that exploded in Yemen’s capital Sanaa on Saturday near the Qiba al-Mahdi mosque, killing two people and wounding six. (Agencies)