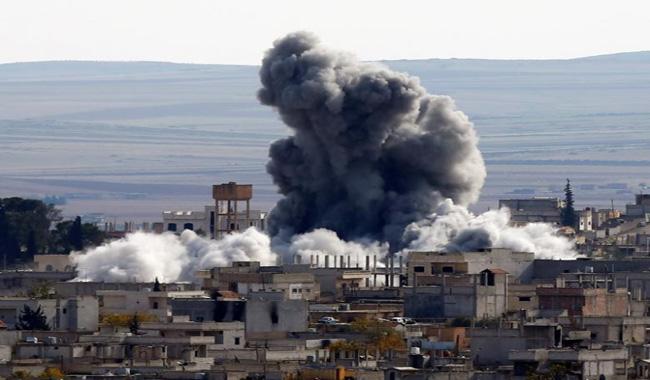 BEIRUT: Air strikes on Al-Qaeda´s former affiliate in Syria on Tuesday killed 37 people in the country´s northwest, most of them civilians, a monitoring group said.
The headquarters of Fateh al-Sham Front and the surrounding neighbourhood in Idlib city were battered by at least 10 strikes at dawn, said the Syrian Observatory for Human Rights.
The Observatory, which relies on a network of sources in Syria for its reports, said the death toll included 24 civilians, mostly women and children.
Observatory head Rami Abdel Rahman said the raids were probably carried out by Russian warplanes — allied with Syria´s government — or by a US-backed air coalition.
But Russia quickly denied it had struck Idlib. “Russian military planes did not carry out a single strike in Idlib yesterday, or this week, or even since the beginning of 2017,” the defence ministry in Moscow said. “Any information on these strikes are well-known lies.” Russia has waged a fierce bombing campaign in support of the Damascus regime since September 2015, a year after the US-led coalition began its own strikes against jihadist groups.
Fateh al-Sham has come under increasing pressure in recent weeks in Idlib province, the only remaining opposition-held province in war-ravaged Syria. Bombing raids against the group have escalated, including one US strike in January that killed more than 100 fighters at a training camp in Idlib province.
On Tuesday, a Pentagon spokesman said US forces targeted Al-Qaeda operatives “in two precision strikes” on February 3 and 4. “The February 4 strike targeted Abu Hani al-Masri, a legacy Al-Qaeda terrorist with ties to the group´s senior leaders, including Ayman al-Zawahiri and Osama bin Laden,” Eric Pahon said. “We are assessing the results of those strikes and will announce definitive results as soon as practicable.” The US-led coalition has mostly focused on Fateh al-Sham´s jihadist rival, the Islamic State group, but it has also hit operatives from other factions.
Rebel groups have held Idlib province since the spring of 2015, four years after the Syria conflict first broke out. More than 310,000 people have died since, and millions have been forced to flee their homes. …Agencies