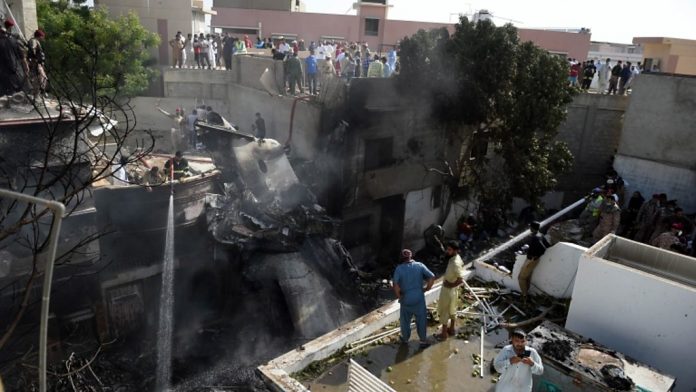 KARACHI: The Airbus investigation team completed its initial investigation into the Pakistan International Airlines (PIA) aircraft crash.
The probe team inspected the runway of the Jinnah International Airport. They also visited the air traffic control tower and radar control station.
The 11-member investigating team of Airbus reached Pakistan from France on Tuesday to probe into the Pakistan International Airlines (PIA) plane crash.
The specialists will visit the plane crash site area in Model Colony and also provide technical assistance to their Pakistani counterparts to probe the reasons for the crash.
The Airbus experts are expected to take the aircraft’s black box recorder which contains the flight data recorder and cockpit voice recorder and any other evidence that would help with the investigation.
The team will fly back to France at 10pm tonight after 16-hours of investigation.
PIA’s Airbus A320 crashed in the residential area of Model Colony near the Karachi airport on May 22, minutes before landing. The plane flying from Lahore to Karachi had 99 persons on board including passengers and crew.
Only two people survived the tragic incident. Earlier, other victims of the crash were laid to rest in Karachi.
The bodies of the deceased are being identified via DNA testing and the process will continue in the coming days, according to authorities.
Preliminary investigations suggest that the crash occurred due to technical faults, however, further investigation is underway.
Meanwhile, the injured from among the site of the crash in Model Colony are under treatment at different hospitals in Karachi.
So far, 41 bodies have been identified and handed over to the next of kin.
The national carrier issued international and domestic tickets to the survivors.
According to the national carrier’s spokesperson, bodies of the victims are being taken to their homes on the special instructions of the prime minister. Four bodies have been delivered to Lahore and three to Islamabad.
“PIA is engaged in the 24-hour emergency response centre to assist the victims’ family members,” the spokesperson claimed. “PIA has immediately started delivering Rs1 million each to the victims’ families.”
The survey team also began its work to assess the damage caused to the property where the aircraft crashed, says the spokesperson.
Repeated appeals have been made by the PIA to determine the real cause of the accident only thorough investigation according to the spokesperson.
“It is inappropriate to determine liability based on limited information and a few videos,” the spokesperson added.
Meanwhile, PIA is carrying out its routine repatriation missions for stranded Pakistani nationals abroad.