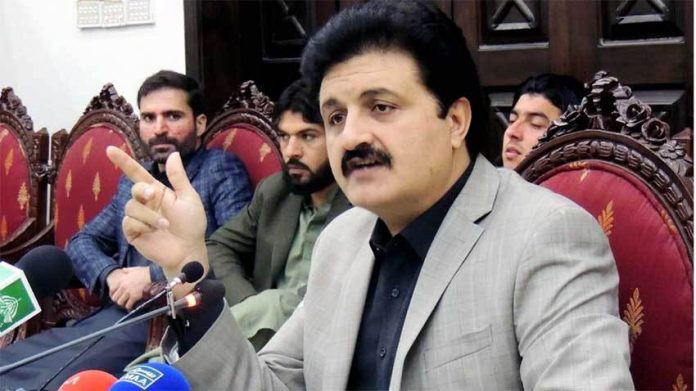 PESHAWAR: The Khyber Pakhtunkhwa (KP) Information Department in a report revealed that former adviser to Chief Minister (CM) Ajmal Wazir had attended two meetings of the advertising steering committee despite not being a member of the panel.
The report, which has been submitted to KP Chief Minister Mahmood Khan, alleged that Wazir violated the rules of the steering committee. It adds that Wazir co-chaired the meeting despite not being a member of it and his signatures are also present on the minutes of the meeting.
The meetings were chaired by Provincial Minister for Health Taimur Saleem Jhagra while the secretaries of health and information departments and DG Information were also present when the decisions were taken.
However, the report clarified that the advertisements were given according to the government rules under the law and policy. It adds that the decision to give the advertisement was given unanimously and that seven agencies expressed interest in running the advertisement campaign for the provincial government.
On Saturday, the Pakistan Tehreek-i-Insaf (TI) leadership removed Ajmal Wazir as Information Adviser to Chief Minister after an audio clip surfaced in which Wazir and another person, believed to be the owner of an advertising agency, were discussing a project and its cost.
Chief Minister Mahmood Khan had ordered an immediate “fact-finding inquiry” into the recently surfaced audio-tape of Ajmal Wazir.
According to PTI leadership, the audio-tape of Ajmal Wazir had surfaced a few days ago but nobody was willing to officially comment on it as they were aware of the consequences and believed it would damage the party reputation.
“It was shared in WhatsApp groups and we listened to it but didn’t know what’s going on. I believe the motive behind the audio-tape was to trap Ajmal Wazir and blackmail him,” said one PTI leader.
Ajmal Wazir after being removed from the office had claimed that a conspiracy was hatched against him.
In a statement, he had said that the conspirators used mean tactics to block his way to serving people. He claimed that fake audio was prepared with pieces of recordings taken from different meetings and briefings. He said the audio was edited from different points on the tape.
He said some questions were asked from him, and he had replied to them. However, those replies were edited and fake audio was prepared with different pieces of the tape.