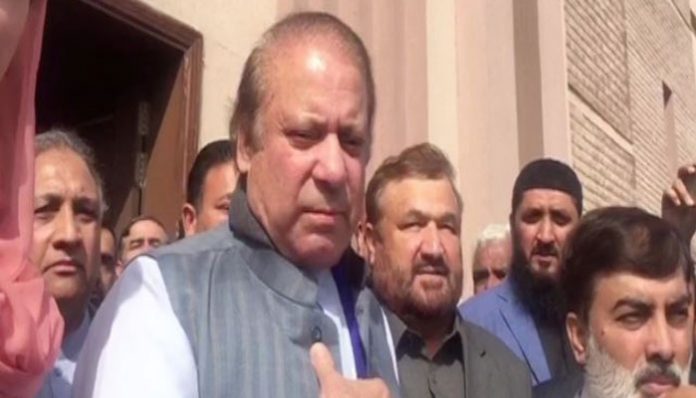 ISLAMABAD: Former premier Nawaz Sharif on Thursday distanced himself from Qatari Prince Sheikh Hamad Bin Jassim Bin Jaber Al-Thani’s letters in Al-Azizia reference.
“I have no relation with the Qatari prince’s letters,” the former premier said while recording his statement for a second consecutive day before an accountability court in Islamabad. The Sharif family had submitted letters from the Qatari royal family before the Supreme Court last year.
Accountability court judge Muhammad Arshad Malik resumed hearing the Al-Azizia corruption reference, filed by the National Accountability Bureau last year on Supreme Court orders. Nawaz has answered most of the 151 questions posed to him by the court in the corruption reference against him.
Responding to a question, Nawaz asserted, “I was not a part of any transaction in any capacity. My name has not been mentioned in any document.”
The former premier also raised reservations over the statements of Wajid Zia, prosecution’s star witness and Panamagate JIT head. While answering the questions, Nawaz also constantly consulted his counsel, Khawaja Haris.
In response to another question, the former premier said, “The records of our business was seized after martial law was imposed in 1999. We filed complaints in this regard but no action was taken.”
“Judge Sb, this not only happened with us in 1999 but has always happened. It is a painful story of our family,” he added.
The former premier continued, “In 1972, Pakistan’s biggest steel mill — Ittefaq Foundry — was nationalised. No one even asked whether we had money to eat.”
“I was not even a politician back in 1972 and entered politics in the 1980s,” Nawaz said.
Further, the former premier said, “The JIT’s Volume X is a mere investigative report and not acceptable evidence. I am not a witness to any document submitted by the JIT other than my tax records.”
“I had provided the JIT with my tax records,” he added.
Nawaz continued, “Mutual legal assistants (MLA) were presented as evidence against me. The MLA from Saudi Arabia did not respond while the response from the one in United Arab Emirates (UAE) was factually incorrect.”
The accountability court has until November 17 to wrap up the remaining two corruption references – Al-Azizia and Flagship Investments – against the Sharif family.