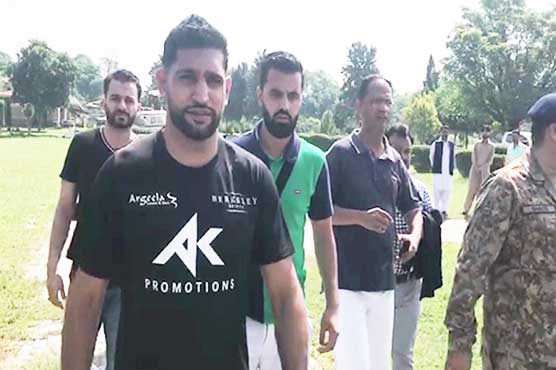 ISLAMABAD: British boxer of Pakistani origin Amir Khan has on Tuesday left for Chakothi – three kilometers from the Line of Control (LoC) – from Islamabad to highlight Indian atrocities in occupied Kashmir and to express solidarity with the people.
The boxer talked to media in the federal capital before his departure, and affirmed that he will let the world know of Indian brutalities in the occupied valley after personally visiting the LoC.
Amir Khan also thanked Pakistan Army and Director General Inter-Services Public Relations (ISPR) Major General Asif Ghafoor for making his visit possible.
It is worth mentioning here that the India-occupied Kashmir has been under curfew for 23 days after its autonomy was scrapped by New Delhi on August 5 by revoking Article 370.