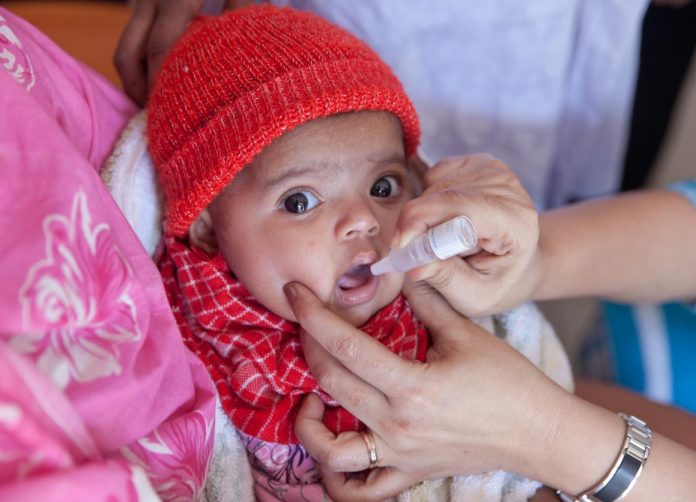 ISLAMABAD: An anti-polio campaign continued on Wednesday to vaccinate the under five years old children for the third day.
During the ongoing campaign, over 39.6 million children under five years of age will be administered polio drops. The Health Ministry teams are busy to administer polio vaccine in the houses and schools. The parents should administer two drops of polio to children for saving their whole life from disability.
According to an official of National Emergency Operations Centre, more than 265,000 frontline polio workers are taking part in the campaign to vaccinate 39.6 million children under the age of five years.
The polio workers are administering anti-polio vaccine to children under the age of five years every corner of the country. The counters have been established on bus stops and railways stations.
It is pertinent to mention here that if no teams reach your home, you must contact with “Sehat Tahaffuz” helpline ‘1166’ and can call for bringing them to your house.
A day earlier, Special Assistant on Health Dr Zafar Mirza urged the entire nation to actively partake in administration of polio vaccine to children in order to defeat the menace.
He said that a five-day countrywide anti-polio drive in underway, while 2,65,000 anti-polio workers were taking part in the drive across the country. “Government is taking concrete steps for the eradication of polio across the country, said PM’s aide Zafar Mirza in a statement on Tuesday.
He further said that the government had introduced “Sehat Tahaffuz” helpline ‘1166’ to provide health-related information services to the people. Zafar Mirza said: “Through the helpline, people can obtain immediate assistance to their queries and concerns related to Polio and routine immunization services.”