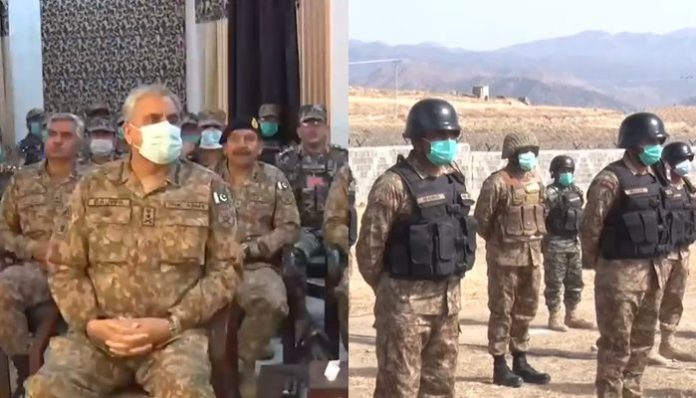 Chief of Army Staff General Qamar Javed Bajwa on Tuesday stressed the need to remain vigilant against hostile attempts to reverse the gains of Operation Radd ul Fasaad. The army chief’s comments, according to Inter-Services Public Relations (ISPR), came during his visit to the North and South Waziristan districts.

He was briefed on the progress of the border management regime, stabilisation operations, socio-economic development projects including the opening of border terminals. The army chief spent a complete day with troops in Asman Manza, South Waziristan, and Mirali in North Waziristan, the military’s media wing said.

The army chief, while interacting with officers and men, lauded their commitment and professionalism in ensuring a secure and conducive environment for implementation of the writ of civil administration in newly merged tribal districts.

Interacting with tribal elders at Mir Ali, he appreciated them for their unflinching support and sacrifices in the fight against terrorism. “Peace has largely returned to these areas. The hard-earned normalcy will be retained and enhanced through the collective efforts of the local population, civil administration, and LEAs. “