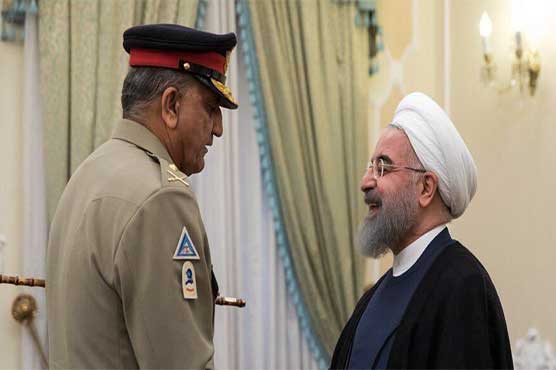 TEHRAN: Chief of Army Staff (COAS), General Qamar Javed Bajwa on Monday met Iranian military and civilian leadership and discussed issues related to geo-strategic environment, defence and security and economic cooperation at bilateral as well as at the regional level.
The Army chief, during an official visit to Iran, met Iranian Chief of General Staff (CGS), Major General Muhammad Bagheri at General Staff HQ, said an Inter-Services Public Relations (ISPR) statemen. The COAS was presented guard of honour. He also laid wreath at Martyrs Monument. Delegation level talks were held between the two sides. The COAS also held meetings with Iranian Foreign Minister, Mohammad Javad Zarif at Ministry of Foreign Affairs and Iranian President Hassan Rouhani at Presidential Palace.
Iranian leadership thanked the COAS for his visit and acknowledged Pakistan’s sacrifices and achievements in the war against terror, contributions towards regional peace and the important positive role that Pakistan was playing in this regard. Afghan situation, growing threat of ISIS in the region and Pak-Iran border security also came under discussion.
The COAS termed Pak-Iran border as border of ‘Peace and Friendship’ and emphasized its better security management so as to deny its exploitation by terrorists being a common enemy. Both the sides agreed to further the proposals for its formalization.
General Bajwa said Pakistan and Iran were two brotherly neighbours with shared history, culture and religion. Both armies also had a history of defence collaboration and cooperation, which had great mutually benefiting potential for its enhancement, he added.
Both the sides agreed to stay engaged for enhanced bilateral cooperation besides working jointly to assist in bringing positive developments in other issues concerning the region. …APP