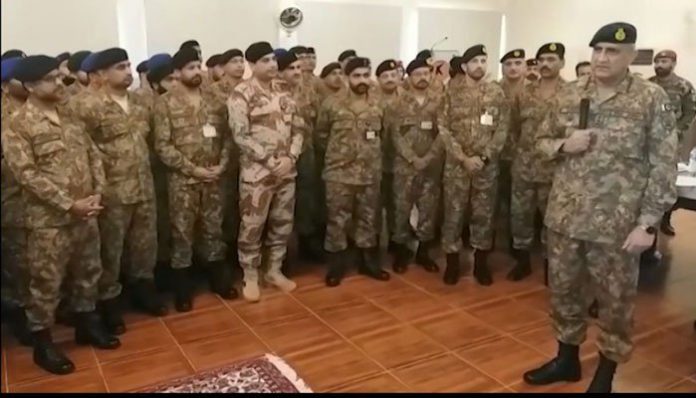 RAWALPINDI: Chief of Army Staff Gen Qamar Bajwa on Tuesday visited Pano Aqil garrison, where he was briefed about the operational preparedness and internal security matters, said an Inter-Services Public Relations (ISPR) press release.
According to the army media wing, the army chief interacted with officers and expressed his satisfaction on the state of preparedness and contribution towards internal security.
The COAS also lauded the troops’ performance during the recently conducted sixth population and housing census and other internal security tasks.
Gen Bajwa, in his address, said that the Army shall continue its support to all state institutions for the prosperity of Pakistan and its people through selfless devotion and commitment, according to the press statement.
“Country comes first, self later”, COAS remarked, according to the ISPR statement.
“We shall now consolidate our gains to further strengthening of the state, neutralising all negative stimulants”, Gen Bajwa said.
He also said that the country has come a long way in its battle against terrorism and militancy, added the ISPR release.