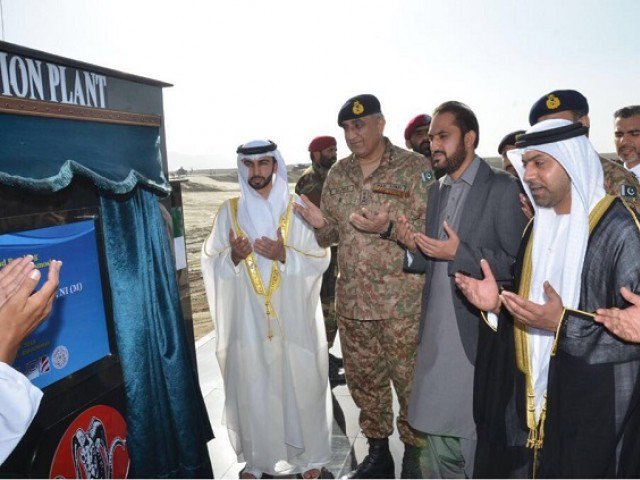 GAWADAR: Chief of Army Staff (COAS) General Qamar Javed Bajwa laid the foundation stone of a UAE and Swiss government-supported Gwadar desalination plant when he arrived in Balochistan on a two-day visit on Sunday, confirmed the army’s media wing.
The project fulfils a long-awaited demand of locals and shall provide them with 4.4 million gallons of water per day with the capacity to increase to 8.8 million gallons per day.
The desalination plant will be completed in six to eight months time and will help resolve the scarcity of drinking water in the area, apart from reducing the hardships of residents of the area, who currently have to fetch water from far-off areas.
“Balochistan’s progress is Pakistans’ progress and the Pakistan Army will extend full support apart from assisting in the socioeconomic development of Balochistan,” stated the COAS.
The COAS further said, “All measures in coordination with the civilian government would be taken to bring peace and prosperity in Balochistan,” as he highlighted the importance of ongoing projects as part of the Khushal Balochistan programme.
He went on to emphasise that these projects will transform the lives of people of Balochistan and that the potential of the province as a regional economic hub will only be realized when the people of Balochistan are best served by these projects.
Balochistan Chief Minister (CM) Mir Abdul Quddus Bizenjo, UAE Ambassador Hamad Obaid Ibrahim Salim Al Zaabi, Commander Southern Command Lieutenant General Asim Saleem Bajwa, the Frontier Works Organisation (FWO) DG, and a large number of locals were present on the occasion.
Later tonight, the COAS will attend the closing ceremony of the Makran Festival in connection with Baloch Culture Day.