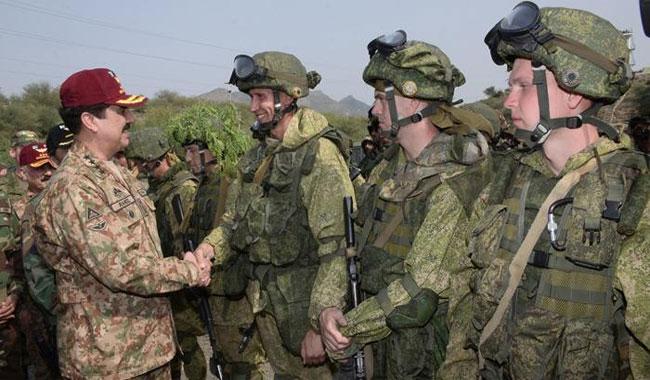 RAWALPINDI: The Chief of Army Staff, General Raheel Sharif on Thursday visited field area near Attock and witnessed the ongoing Pakistan-Russia joint exercise “ DRUZBAH”, said Inter Services Public Relations.
The first ever joint exercise between Pakistan and Russian military commenced on September 27 and will conclude on October 10.
According to the statement issued by ISPR, the media wing of military, the Army Chief met participating troops and appreciated their professionalism, skills and dedication.
Paying tributes to both armies, COAS said, “Pakistan Army troops are most battle-hardened and experienced, and reckoned as one of the best in the world as are the Russian troops rated best amongst contemporary armies”.
He said that such joint military exercises will provide an excellent opportunity to participating troops to learn from each others’ experience in counter terrorism domain.