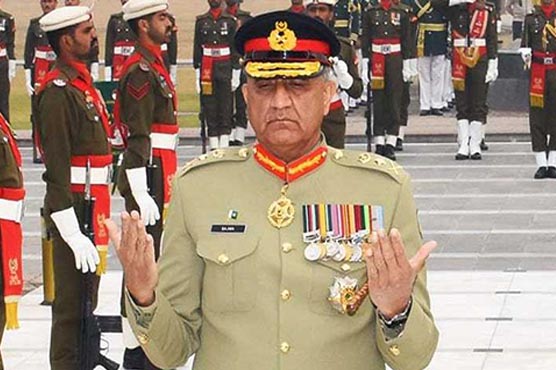 ISLAMABAD: Chief of Army Staff (COAS) General Qamar Javed Bajwa on Monday has said that the horrific carnage of Army Public School that claimed lives of over 140 people including students will never be forgotten.
In a post on social-networking website, the top army official told that five of the involved terrorists have been hanged through military courts. He further saluted to the bravery martyrs and their families.
“We have come a long way in failing terrorism as a nation. United we move towards lasting peace and prosperity of Pakistan,” he added.
It is to be mentioned here that nation is remembering the painful massacre of APS on its fifth anniversary today.
On this day in 2014, six terrorists affiliated with Tehreek-e-Taliban Pakistan (TTP) had stormed the School and martyred one hundred and forty-seven students and teachers.
The deadliest attack in Pakistan’s history, the carnage prompted the government to declare an all-out war against terrorist outfits. In the wake of the attack, military courts were set up for trying terrorists under amendments made to the Constitution and the Army Act.
The mastermind of the APS massacre, Umar Mansour, alias Khalifa Mansour, alias Umar Naray, was killed in a drone strike in Afghanistan.
Following the attack, political parties and security departments formed a National Action Plan to stem extremism and terrorism.
According to reports, since the school attack, at least 1,584 terrorists were arrested and sent to jail. Apart from it, 167 high profile terrorists with head money were also detained or killed.