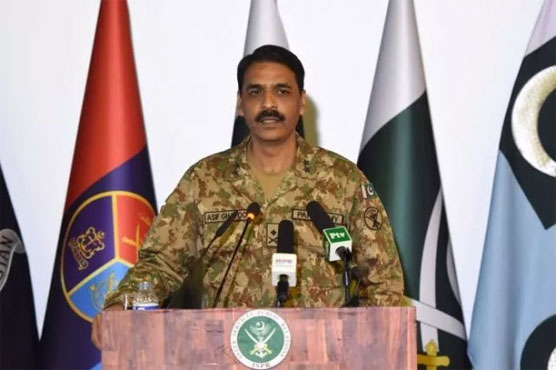 RAWALPINDI: Director General Inter Services Public Relations (ISPR) Major-General Asif Ghafoor on Tuesday said that the role of Pakistan Army is to support the Election Commission of Pakistan (ECP) in a non-political manner in ensuring peaceful, free, fair and transparent conduct of the upcoming general elections to be held on July.
While addressing an ‘important’ press conference, Major-General Ghafoor said, “The armed forces are not directly involved in conducting the election.”
“I am constantly asked whether elections will be held or not but Pakistan is headed towards the general election.”
“This is the third election which will ensure the democratic process,” he said.
“We have to support the Election Commission of Pakistan (ECP) in the tasks they have sought our help with,” he continued.
He further added this is not the first time that troops will be deployed to overlook the election process. “The armed forces have rendered services during previous elections as well,” he upheld.
Regarding overlooking the process of the printing of ballot papers, DG ISPR clarified, “We only have to transport the ballot papers in a secure manner and will not be involved in anything else.”
“We will not take over the printing material, the ECP staff will handle that,” he asserted.
“In Rawalpindi we have established an army election support centre to coordinate and if needed communicate with ECP,” the DG ISPR said.
Maj-Gen Ghafoor further revealed that the ECP has issued a code of conduct for the military. “We are bound to implement a code of conduct issued by the ECP when executing our duties,” he said.
“Our top priority is to maintain peace and security in the country,” he upheld.
“We will carry out our duties in a non-political and impartial manner without any interference in the election process,” the DG ISPR maintained.
Further, the DG ISPR shared that the ECP has made a system through which pictures will be taken and transmitted to returning officers to ensure that when the votes are counted they are neither less nor more.
Major-General Ghafoor also requested the media to not question the troops deployed at polling stations.
“I’d like to request media persons to refrain from approaching troops deployed at the stations,” he said.
“We do not have any political party or alignment and are working only for the country,” he said.
The DG ISPR further urged the nation to come out and vote.
“No matter who you support, come out and vote for them,” he said while adding that he hopes the voter turnout will increase.
During his last press conference on June 4, DG ISPR had pointed to growing negative propaganda on social media against Pakistan and its institutions, including the army.
Major-General Ghafoor had said there had been an increase in social media accounts which were spewing anti-Pakistan and anti-army content against facts.
“We have the capability to monitor social media as to who is doing what,” the DG ISPR had said.
He had also spoken about the Pashtun Tahaffuz Movement (PTM) for the first time and had also briefed media regarding ceasefire violations by India.