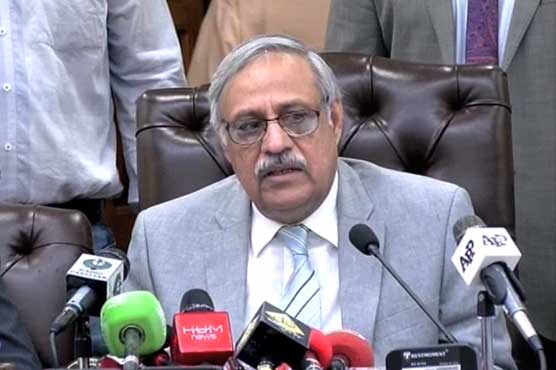 ISLAMABAD: Secretary Election Commission of Pakistan (ECP) Babar Yaqoob Thursday said that security personnel, to be deployed inside and outside polling stations on the Election Day, would have no direct or indirect role in compiling and dispatching process of election results to the commission.
Addressing a press conference, he categorically stated that security personnel would have no role in “result transmission” as Presiding Officers (POs) would carry out the whole exercise – vote counting, result compiling and its onward transmission after tabulation through Result Transmission System (RTS) to the Returning Officers (ROs) concerned and eventually to the ECP.
He said the code of conduct clearly defined the role of security personnel deployed inside and outside the polling stations about their election duties and in case of any irregularity and malpractice, they would only report to the PO concerned.
The secretary said security personnel would be assigned the same task and powers as had been given during every election in the past.
The army was being deployed on the request of political parties and they would perform their duties as per the Constitution, he added.
Babar said the prime and major responsibility of the forces would be to maintain law and order, besides providing assistance in the conduct of free, fair and transparent general election. “The army shall ensure the security arrangements and it shall have no direct role in conduct of the election.”
Keeping in view the recent attack in Peshawar on an election corner meeting, he said, the commission had taken the decision to deploy army at the polling stations.
He said provincial governments had installed CCTV cameras at about 18,000 polling stations, while ensuring that the cameras were fixed at spots where voters’ secrecy was not compromised.
He also said that mobile phones would not be allowed within the premises of the polling stations.
The secretary said any candidate, on receiving threats or being pressurised to withdraw from the election, should inform the commission.
He said the caretaker prime minister and agencies had been informed about the threats to various election candidates.
The ECP would take action against the individuals on receiving formal complaints, he said adding, “We are here to address the concerns of political parties.”
To a question he said “All four the provincial governments have been handed down instructions for providing safety to election candidates, and the commission is keeping a vigilant eye on security arrangements made for them.”
He said all necessary material had been dispatched to provinces, while the process of printing and dispatching of ballot papers was in progress, assuring that all ballot papers will be dispatched as per the announced schedule.
However, for 108 constituencies, ballot papers had not yet been printed due to legal proceedings, he added.
He said the process in 22 Punjab, 81 Sindh and 5 Balochistan constituencies had been halted due to legal proceedings.
To another question, he said the electoral code of conduct was being fully implemented, and the ECP monitoring teams were vigilant to check any violation in the whole process. – APP