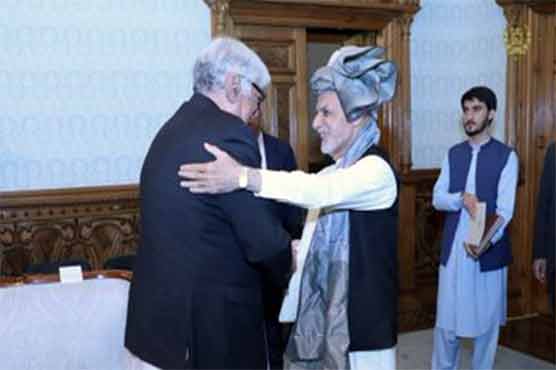 KABUL: Awami National Party (ANP) chief Asfandyar Wali on Friday met Afghan President Ashraf Ghani in Kabul.
During the meeting, matters pertaining to bilateral interests and other issues came under discussion. ANP General Secretary Mian Iftikhar Hussain, ANP Balochistan president Asghar Khan Achakzai and Abid Khan were also present in the meeting.
On the occasion, the Afghan president said that Pakistan should sincerely extend hand of friendship to deal with poverty and energy crisis, adding that the writings of scholars, researchers and experts will be published in Afghanistan.
On the other hand, the ANP chief said that the US, China and Russian should play mediators role in Pak-Afghan dialogues, adding that the Pakhtuns living on both sides are suffering in the ongoing war on terror.
Wali went on to say that the dialogues without the ownership of Afghan government cannot be accepted for the people of the Afghanistan.
Afghan government should also play a positive role to end misunderstandings between two brotherly countries.