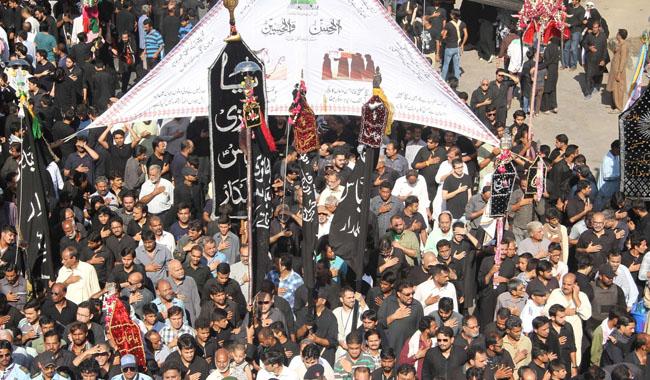 ISLMABAD: The day of Ashura was marked across Pakistan with devotion, respect and commitment to Imam Hussain (R.A) as rallies and processions taken out from various cities on the 10th of Muharram terminated peacefully at their respective destinations.
The central procession in Karachi was taken out from Nishtar Park at 08:30 am and concluded at the time of Maghrib prayers at Hussainia Iranian Imam Bargah. Cameras were installed at 275 places to monitor the processions and more than 15,000 policemen were deployed to ensure safety of the participants of the rally.
The procession are passing through its historic route of Numaish Chowrangi, M.A. Jinnah Road, Imam Barga Ali Raza, Sea Breeze, Empress Market, Regal, Tibet Centre and Bolton Market concluded at the Hussainia Iranian Imam Barga at Kharadar.
All other rallies joined the main procession at Nishtar Park. Majalis were also held across the city to pay homage and respect to Imam Hussain (R.A) and his supporters for their sacrifice during the battle of Karbala.
Sindh CM himself monitored the situation from the Command and Control Centre established at the CM House in Karachi.
Rallies and processions marking the occasion of the martyrdom of Imam Hussain (R.A) were also taken out in other cities across Pakistan.
Lahore’s historic main Ashura procession commenced from Nisar Haveli and concluded at the Karbala Gamay Shah at Maghrib.
Strict security measures were taken along the routes of processions to avoid any untoward incident.
On this occasion, special security arrangements were made for the maintenance of peace.
Hospitals were asked to remain alert for any emergency situation.
Thousands of people distributed ‘niaz’ (food, milk, soft drinks and water) to participants of the mourning processions.
Security was also tightened at all the Imambargahs and routes of the processions.
In Sindh, Khyber Pakhtunkhwa, Balochistan, Azad Jammu Kashmir, Gilgit Baltistan, all roads leading to Imambargahs were sealed and strict security was ensured for the processions.
Mobile phone services remained suspended from 12:00pm to 07:30pm in several cities including Karachi.
The provincial governments had requested the federal authorities to suspend the cellular networks in various cities due to terror threats.