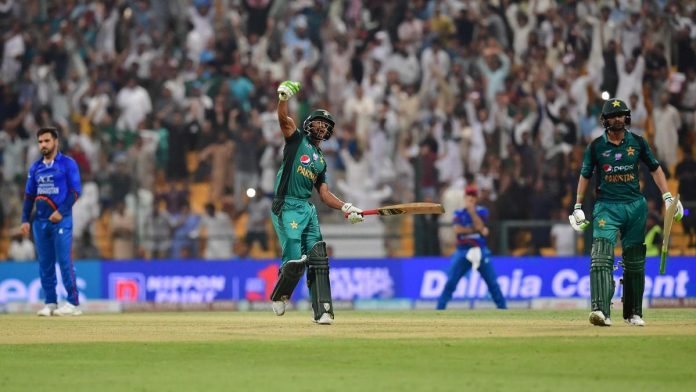 ABU DHABI: Pakistan have beaten Afghanistan by three wickets in the Asia Cup Super Four match after a thrilling contest at the Sheikh Zayed Stadium in Abu Dhabi on Friday night.
The match was decided in the very last over, as Pakistan chased the target with only three balls to spare.
The bedrock of the victory was laid by Imam-ul-Haq and Babar Azam after Pakistan lost Fakhar Zaman in the very first over of the innings, trapped LBW by Mujeeb ur Rahman.
The two wrestled control of the match with a partnership of 154 for the second wicket; this was the highest second wicked partnership in Dubai beating 151 run stand between Chris Gayle and Ramnaresh Sarwan in 2008.
However the two got out quickly and gave Afghanistan a foothold in the match. Imam was run out for 80, while Babar was stumped for 66.
Pakistan’s most experienced batsmen kept his head as others around him lost theirs and hit a six and four in the last over to guide Pakistan to victory. He finished not out on 51.
As has been the case, Afghan spinners were their most lethal weapons with Mujeeb picking up two wickets while Rashid Khan picked up three.
Earlier, Afghanistan scored a competitive score of 257/6 in their 50 overs after a bad start in which both the openers had departed just after the first powerplay.
Left arm spinner Mohammad Nawaz sent both opening batsman packing and also picked up the wicket of Rahmat Shah, who had scored his 1000th ODI run during the match.
Real emphasis was provided to the Afghan innings by a 94-run fourth wicket partnership between Hashmatullah Shahidi and skipper Asghar Afghan. Afghan scored a breezy 67 off just 56 balls, an innings which included five hits over the boundary.
Shahidi was the real star with the bat, scoring 97 as he notched up his highest ODI score, this was also the first occasion that he had scored back to back fifties in coloured clothing.
Afghanistan also made the best of the death overs as they scored 87 in the last 10 overs, that after they had scored 97 in their previous match against Bangladesh on Thursday.