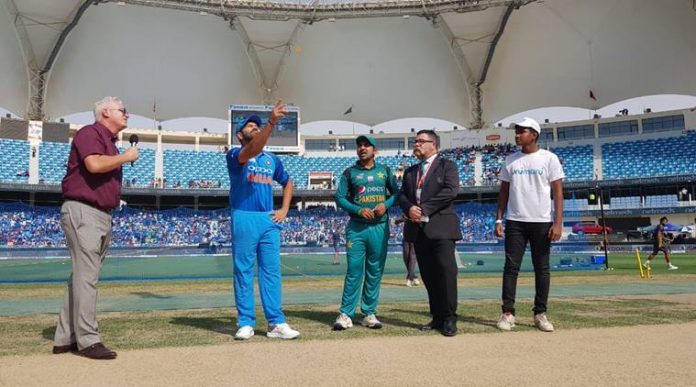 DUBAI: Pakistan won the toss and decided to bat against India in the highly anticipated match in 2018 Asia Cup at Dubai International Stadium.
After the toss, Pakistan captain Sarfraz Ahmed said: “we will try to score more than 280 runs.”
Meanwhile, Indian captain Rohit Sharma said that they would have also opted for batting.
Both teams are facing each other for the first time since green shirts thumped India in Champions Trophy 2017 final by 180 runs at the Oval last June.
The stage is set for the highly anticipated clash between India and Pakistan at the Asia Cup. Pakistan have taken an early advantage in the match. On a pitch that seems to be favourable to the batsmen, the Sarfraz Ahmed-led side has elected to bat first after winning the toss. India skipper Rohit Sharma looked upset at the toss. “Would have elected to bat first as well, ” he said. India go in with two massive changes – Jasprit Bumrah and Hardik Pandya are back into the side. Khaleel Ahmed and Shardul Thakur have been dropped from the side. Pakistan move ahead with no changes. A dangerous game is afoot. Catch Live score and updates of India vs Pakistan Asia Cup 2018 Live ODI match.
Further, it is the first match between both teams in the United Arab Emirates (UAE) since 2006, the last of their games which were also being played in Sharjah between 1984-2000.
Both teams have played 12 matches in the Asia Cup.
Pakistan has won five games while India remained victorious in six matches, while one match was abandoned.
PAKISTAN SQUAD:
Sarfraz Ahmed (captain/wicketkeeper), Fakhar Zaman, Shan Masood, Babar Azam, Harris Sohail, Imam ul Haq, Asif Ali, Shadab Khan, Mohammed Nawaz, Faheem Ashraf, Hasan Ali, Mohammed Amir, Shoaib Malik, Junaid Khan, Usman Khan, Shaheen Afridi
INDIAN SQUAD:
Rohit Sharma (captain), Shikhar Dhawan, KL Rahul, Ambati Rayudu, Manish Pandey, Kedar Jadhav, MS Dhoni (wicketkeeper), Hardik Pandya, Bhuvneshwar Kumar, Jasprit Bumrah, Kuldeep Yadav, Yuzvendra Chahal, Shardul Thakur, Dinesh Karthik, Khaleel Ahmed