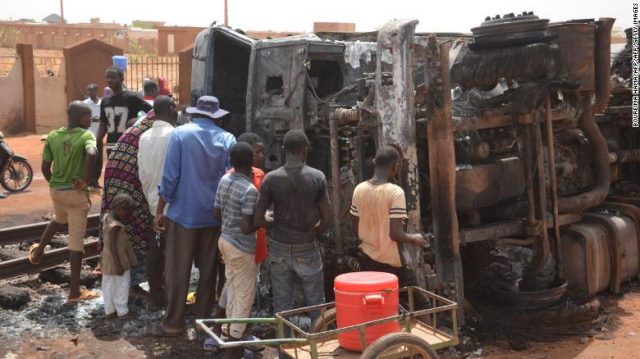 NIAMEY: At least 55 people were killed and 37 injured in an explosion in Nigeria, according to Interior Minister Mohamed Bazoum.
The explosion happened late Sunday on the road leading to the airport in Niamey, the capital of the West African country, the CNN reported. The blast on the RN1 route near Niamey’s international airport left the burned vehicle’s wreckage, motorcycles and debris scattered over the road. Nearby houses were also damaged by fire.
“It was just before midnight when I went out and I saw the truck overturned. People came from everywhere to take gas, then I saw fire on its side and everything burst into flames,” a college student told Agence France-Presse.
President Issoufou Mahamadou called the explosion a “national tragedy” after visiting a hospital where dozens were wounded, some with serious burns. The death toll was expected to rise as doctors said some were in critical condition. …Agencies