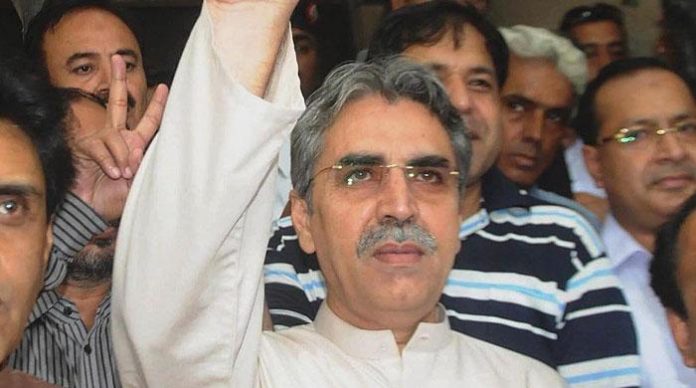 KARACHI: An anti-terrorism court on Saturday indicted senior Muttahida Qaumi Movement Pakistan (MQM-P) leader Amir Khan and activist Minhaj Qazi in a case related to providing shelter to terrorists.
The judge read out charges against the accused persons, who pleaded not guilty and opted to contest the charges.
The court directed prosecution side to present its witnesses on next hearing on December 4 to record their testimonies.
Amir Khan, who is out on bail, has been booked along with several party activists for allegedly providing shelter to terrorists and using them for terrorist activities.
Back in 2015, the MQM leader was taken into custody by the Rangers in a pre-dawn raid on the party headquarters Nine Zero in Azizabad. Subsequently, he was placed under 90-day preventive detention for questioning.
According to the FIR registered at Azizabad police station, Khan, who was in charge of the party headquarters security at that time, with Minhaj Qazi, Raees Mama, Naeem, Aijaz Niazi, Shahzad Mullah and others had allegedly provided shelter to criminals and had been using them for terrorist activities in the city.
Mama and other absconding accused had been declared as proclaimed offenders.
PPP leader Dr Asim Hussain, a close aide of former president Asif Ali Zardari, is too facing similar charges. In two separate cases, he had been accused of treating and harbouring suspected terrorists and gangsters at the North Nazimabad and Clifton branches of his hospital.
He was alleged to have done all this at the behest of some politicians, including Karachi mayor Waseem Akhtar, Pak Sarzameen Party president Anis Kaimkhani, MQM leader Rauf Siddiqui, PPP leader Abdul Qadir Patel and Pasban leader Usman Moazzam.